You are here: Products Linked Circles by Elise Covert 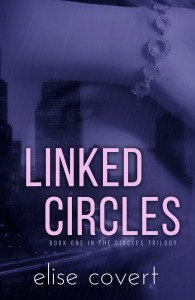 Nicole Simmons had a great life, a life most women would envy: a fantastic job at a non-profit foundation, a sexy considerate lover with no strings attached, fun friends and a bright future.

And then Nic met Jack LaTour.

Nic slowly gives Jack her trust and Jack gradually deepens his emotional commitment to her. But as the eroticism around them blooms, Nic begins to realize just how decadent a life Jack has led. Is this a world she wants to enter? And can Jack keep her safe if she does?

Elise plans on bringing all of the sexy stories in her head to life in her books. That’s a promise of lots of books to come.

He took her chin in his hand and leaned in to kiss her goodnight.
And like a match to gasoline, their fiery passion burst back to life. He pushed her back against the door. His hands grasped hers and brought them up on either side of her face as he devoured her mouth, seizing her lips. Her breasts, aching, pressed against his chest as he leaned in. He wouldn’t let her go this time, she could tell. She could feel the swell of his arousal pressed against her hip, feel the hunger in him as his fingers tightened around her wrists and he secured her beneath him. His power seemed to rise around them both, enveloping her as well as him. She whimpered with her need for him. Her knees began to give way, but it didn’t matter. He had her.
There was a honking from the street outside and Jack jerked his head back from her.
“Damn cab!”
Nic panted and he looked back at her. “You okay?”
“No.” She shook her head. “I’m not okay. You are amazing.”
He smiled. “When can I see you again?” he asked.