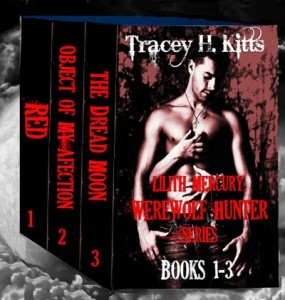 This is a collection of the first three books in the Lilith Mercury, Werewolf Hunter series. This series focuses on the life of Lilith Mercury, a werewolf Hunter who is also half werewolf. Did I mention there are several sexy men in her life? This story has graphic violence, and graphic sex. It also has a new take on the origins of werewolves and vampires. There are many ups and downs in Lilith’s life and much more to come.

This series gets hotter as it goes. No werewolves were harmed in the making of this series.

I have always loved werewolves, vampires, and folklore. I just couldn’t help myself.

This excerpt is from Object of My Affection, Book II in the Lilith Mercury: Werewolf Hunter Series by Tracey H. Kitts.
“What if I help you?” he asked.
I stopped and turned to face him through the rain.
“Why would you do that?”
“Well, once we hear from the council, it might not be your job to kill me anymore. Might as well be nice,” he said with a shrug.
Bade smiled, but his angelic features didn’t fool me.
“Look, I’m out of time for this. And whatever the council decides is irrelevant. I’ll most likely have to kill you one of these days anyway.”
I tried to walk away and he pulled me back.
“Then why didn’t you kill me back there? Why not kill me now?”
“Because you aren’t trying to hurt me or anyone else at the moment, and I don’t have time to fool with you.”
When I turned to leave again, I heard him take a step to follow me and I rounded on him.
“Bade, come to the point or I swear, I will hurt you in a way that you would not enjoy.”
He threw back his head and laughed. The pale gold of his hair clung to his face and neck. The small place where my sliver blade had nicked him had already begun to heal. With my eyes I traced the water that cascaded over his lovely features and tried to fight what I was feeling. I wanted Bade too, physically at least. Who could blame me?
Bade wasn’t handsome in the classical sense of the word. He looked like an angel. Not the fat little cherubs, but the warriors. The tall magnificently crafted cherubim of legend. He was the essence of sin, captured in the embodiment of heaven. What could be more appealing than the devil trapped in an angel’s body? He knew all the wrong things to do, and had all the right equipment to do it with.
“Once things have settled down, I have something I’d like to discuss with you,” he said.
Shit. I’d heard that line before. I didn’t like where the conversation was leading.
“You and I have nothing to discuss,” I replied softly.
“Perhaps, but things change. Marco might not always be in charge.”
My heart beat faster at the implied threat which was exactly what I needed to shut off my libido.
“Do not threaten Marco in my presence.” My voice was calm, which meant I was really pissed.
He ran a hand through his wet golden hair. “Easy love, don’t take it personally. Besides, you haven’t accepted his offer … have you? I mean, that wouldn’t exactly go over well, would it? The daughter of the commander of The Hunters, cavorting with the head of the local werewolf pack.”
“I take any threat against Marco personally. The rest is none of your business.”
The instant I uttered the words I knew they were true, but it still shocked me to hear it out loud. I had just admitted that I would defend the safety of a man who only months ago, I’d been sworn to kill. Technically, I was still sworn to kill Marco. But like Bade had said, that could all change very soon. Even if it didn’t change, I knew in that instant I would never hurt Marco. I wasn’t capable of it.
Bade was a different story.