You are here: Products Like A Song by Nakeesha Cluse 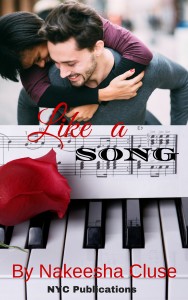 Jordan Arlotti fell hard and fast for Lia Michels freshmen year at Georgia State University but when given a chance to pursue his dreams, he turned his back on love.

Two years later, he’s one the hottest young artist in the world but he’s haunted by the memory of his first love.

One poor decision turns his world upside down, as he soon finds himself being dropped from his label and battling in court to keep his freedom.

Broke but not broken, Jordan gets a second chance to redeem himself and his career but this time on his own terms.

Finding himself on top again, he only has one thing on his mind….

She hopes you enjoy her books and looks forward to your reviews. Thank you for you purchase!

I wanted to write a prequel, if you will, to the first book in the series. It tells the story of how Jordan Arlotti and Lia Michels fell in love and the events that tore them apart. This book takes place 15 years in the past. We learn how Jordan’s one decision changed both of their lives. We also see the struggle both characters go through as they try to move on from the heartbreak and loss of their first love.

It was mid-day and Jordan had to take three buses just to make it to his lunch meeting, but he managed to make it on time. The restaurant was immaculate. The only way Jordan would have ever been able to enter a place like this in the past would have been as a bus boy, but here he was, sitting in one of the best restaurants in town, getting ready to make a decision that would change his and Lia’s life forever.
“I’m glad you agreed to meet me Jordan. I think we got off on the wrong foot and I wanted to clarify things.”
Joanna Cassidy smiled as she sat across the table. She arranged for the two of them to have lunch in hopes that she could convince him to sign with her label. She didn’t want to let on, but she was desperate. It hadn’t been easy for her making a name for herself as an artist let alone a female producer. In her eyes, Jordan was her shot at building a legitimate reputation.
He was exceptionally talented and sexy as hell; the complete package. He was ready for stardom. The girl was good too, but it didn’t matter if she was Aretha Franklin, she was the one thing keeping Joanna from Jordan and Lia had to go. Joanna underestimated his feelings for the girl and she realized the only way she was going to get him was to throw the girl some bread crumbs. Joanna was willing to compromise, anything to get him to sign.
“You see Jordan, I want you.” She wasn’t lying, she hadn’t been able to get him off her mind since they met. If she couldn’t have him in her bed, she was determined to have him as her artist. “I think you are an amazing vocalist and musician. We need someone like you.”
He ran his hand through his hair. “Thank you, Joanna, but Lia and I…”
“I know, I get it. You two are a couple, a package, can’t have one without the other.” She forced a smile. “I’m willing to take her on as a songwriter. She has a gift; I’ll give her that but the vocals…. well, there just not up to your level.” She stroked his ego like only she knew how.
Jordan shuffled in his seat, feeling uneasy about meeting Joanna behind Lia’s back. “Joanna….”
“I’m sure with some vocal lessons she would make an excellent background singer but you…. you’ve got what it takes Jordan and I’d hate to see you throw this opportunity away for…. for some girl.” She hesitated, “I’m willing to sign you right here and now, baby. You’ve got it like that. You have to ask yourself, what do you want? I mean what the hell is all this for if not to finally get signed. You don’t want to sing at second rate clubs your whole life, do you? ”
Her words tugged at his heart. Jordan wanted this bad, was he really going to let this opportunity go?
Joanna pulled a stack of papers from her bag, “Here’s the contract Jordan, just sign it and I promise you I will make you a star.”
Jordan hesitated, Joanna was handing him his dreams on a silver platter, was he really going to turn her down? He thought about all the nights he spent practicing, performing anywhere just to get his music out there. This was what he worked so hard for.
Grabbing the contract from her and a pen from the table, he paused. Lia would understand, he told himself. If she loved him, she would understand.
Joanna smiled as Jordan signed away his artistic rights without even glancing at the contract. It was easier than she thought. Oh, she planned on making him a star alright but one she controlled with an ironclad contract. Jordan Arlotti belonged to her now. All that remained was to drive a wedge between him and his little girlfriend.