You are here: Products Life (Citizens of Logan Pond book 1) by Rebecca Belliston 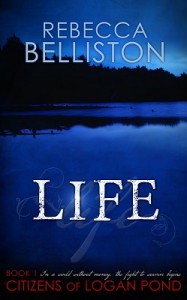 Her home. Her parents. Her freedom. Gone.

His dreams. His sister. Himself. Lost.

The economy crashed, the country is floundering, and Carrie Ashworth struggles to keep her siblings alive. She has two jobs in her newly-formed, newly-outlawed clan: grow crops to feed thirty-six people, and maintain contact with Oliver Simmons, their local patrolman. Carrie’s life is almost content when Greg Pierce shows up. A man with the ambition to help them survive. A man determined to hate her. Carrie is forced to choose: follow her heart or save her clan. Life won’t let her choose both.

“A powerful, realistic story about life and love and the resilience of the human spirit. Just the right mix of action, drama, and romance.” – Readers’ Favorite

Rebecca Lund Belliston is the bestselling author of the dystopian trilogy, CITIZENS OF LOGAN POND, and the LDS romantic suspense novels, SADIE and AUGUSTINA. She’s a sucker for a good romance, a good clean romance, and as such, her stories are layered with engaging romance and heart-pounding adventure. Rebecca is also the bestselling composer of religious piano and vocal music that has been performed around the world. When she’s not writing fiction or music, she loves to cuddle up with a good book. She and her husband live in beautiful Michigan with their five kids.

I’ve loved delving into the world of Logan Pond, asking myself what if, what if, what if? Some of the answers are chilling, but some are also encouraging. I believe as Carrie does: The human spirit is resilient. People come through hard times better and stronger. And most importantly, love on every level can endure all.