You are here: Products Licking Lollipops by Marami Hung 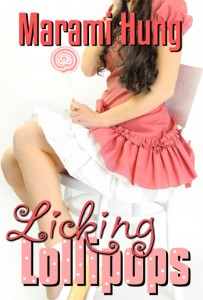 Leilani’s job is more addicting than sugar. It’s her drug. She might look meek and too young to be a college student, but she’s a naughty girl with a dirty secret.

Leilani grants fantasies. When a request comes in, Leilani dons her pseudonym “Lollipop” and transforms into a high school cheerleader, a dominating cat girl, or even a sweet little Victorian girl who loves candy and ice cream.

Her business satisfies her lust, pays just enough for college tuition, and always draws her back, despite the abuse that torments her afterward.

But when a gorgeous classmate finds out and urges her to stop, Leilani’s first fear isn’t getting kicked out of college. She’s terrified that she might give up her primal lust for genuine intimacy.

Marami Hung began her escapades with erotica as the narrator of J.S. Cooper’s The Love Trials. You can also hear her in Kylie Gable’s Calendar Girl and Amber Ambrosia’s An Older Man’s Lust. Her debut novel, Licking Lollipops, will also be available as an audiobook.

I’m an audiobook narrator in addition to a writer, and I wanted to write something that I would love to perform.