You are here: Products Let’s Be Just Friends by Camilla Isley 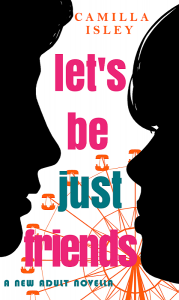 What if the man you’ve always loved isn’t the right one for you?

Rose Atwood has been in love with her best friend since she was twelve years old. The only problem is, he’s the biggest player to have ever landed on Earth. Rose has waited forever for Tyler to grow up, all the while keeping her feelings under wraps for fear of getting hurt. But after watching Tyler go through girl after girl, Rose has lost hope he’ll ever change.

Being Tyler’s best friend is becoming more difficult with every passing year and every new woman in his life—especially when the girlfriend du jour is Georgiana, a snotty, beautiful girl who’s in Law School with them and who never leaves Tyler’s side.

When Rose, dumped by her long-term boyfriend, moves temporarily into Tyler’s apartment, tension spikes. Georgiana wants Rose out of the house. Rose wants Georgiana out of Tyler’s life. And Tyler … well, he doesn’t really know what he wants.

As an unexpected argument brings Rose and Tyler closer than they’ve ever been, they must decide if there’s more to their relationship than being just friends. And they must do it quickly, as Georgiana is determined to do everything in her power to keep Tyler and Rose apart. After all, all is fair in love and war.

Will Rose make a leap of faith and trust Tyler with her heart?

Will Tyler make the right choice, or will he be too late?

Camilla was born in 1984. She’s an engineer who has always had a vivid imagination and a more creative approach to life. After working in a corporate job for some years, she left everything to follow her husband around the world in a new adventure. Upon finding herself with loads of free time for the first time in a long while, she decided to begin pouring some of her fantasies into words…