You are here: Products Let Go by Allie Winters 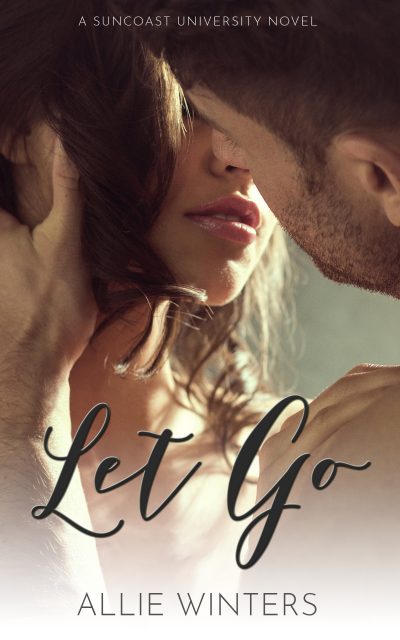 She keeps her heart locked up tight

Putting yourself out there? Getting close to others? No, thanks, I’ll pass. It’s safer to keep to yourself. I’ve learned that lesson the hard way. So when I accidentally tell the muscled hunk I’ve been secretly drooling over all semester how I really feel about him, it’s not like I meant for him to take an interest in me. I don’t want a boyfriend. Not even when it turns out he’s so much more than just brawn.

My goal for so long has been simple – get into grad school. And when I get a dream TA position at the beginning of the new semester that will help me achieve just that, I’ll have to forget about him now that he’s my student. Easy, right?

He wants her to let go of all that control

I can’t get her out of my head – the shy, sexy brunette that’s trying so hard to keep me at a distance. I can be patient, though. Anything to break through that reserve and get under her shields. But just when I thought I’ve succeeded, she’s off-limits. Say hello to my new TA. Even though I’m hot for teacher, there’s no way she would risk this opportunity. Right?

Allie lives in sunny Florida with her husband, daughter, and two cats. A librarian by day, she spends her nights writing happily ever afters. She enjoys reading, playing video games, and all things Disney.

I have to thank my husband for believing in me and giving me the kick I needed to start writing in the first place.