You are here: Products Leona’s Legacy by L..A. Carey 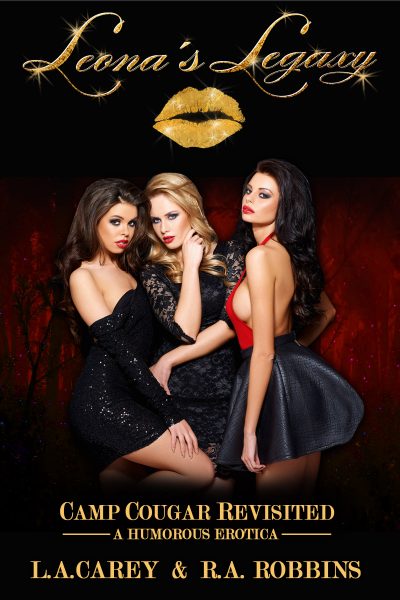 Camp Cougar is back in this scandalous and uncensored tale of oversexed Cougars from Southern Charm Dating Service. Readers will love the ramped up naughtiness and extended provocative love scenes. No holding back on secret confessions this time and forbidden love. The business is booming and Southern Charm Dating Service is on the lips of far too many men in the south. The Cougars are performing some of the wildest sexcapdes ever! Things get overheated as clever head mistress, Leona Patrone has discovered a new product that is said to drive men crazy! The ladies at Southern Charm have taken kissing to a whole new level with their new ‘Golden Arousal’ lipstick. Some say this dangerous lipstick is forbidden fruit. Is it worth risking the side effects for the money? For the attention?

But it’s payback time for Leona and her team as some of their hottest secrets are about to be exposed by the crooked manager at Cougar Creek Resort. Leona Patrone herself has a plan and it’s time to punish this bad boy. Let’s just say Mr. Landers will get what’s coming to him- and in the worst way.

Lorraine Carey is a veteran children's reading specialist, teacher and an International Award-Winning Author. She has taught in many states in the US and provided reading services for students at a private school on Grand Cayman, where she lives with her husband. Eight years ago she was a city gal, living in Orange County, California, where life was very different from the one she lives now. Trading in her fashionable heels for flip-flops was quite a change, but led to a lifestyle that allowed for a writing career to begin.

Her love for paranormal stories and urban legends began at a young age, when staying up all night to watch spooky movies or reading a scary book started a lifelong passion.

Lorraine is no stranger to the paranormal, as she has encountered many unexplainable events during her lifetime. Many of those events have been woven into her fiction tales.

Published novels include: Losing Ground, a short memoir, followed by Mysteries of the Red Coyote Inn, Out of the Ashes, Jonathan's Locket, The Last Vestal Virgin and Beloved Sacrifice. These novels are paranormal with a mix of historical fiction, woven with urban legends and suitable for young adults to adults. A Rock Star Reader by Kindergarten is a self-help guide for parents on creating a successful reader and lifelong lover of literacy. The Good Teacher and On Borrowed Time are her latest works in the Women of the Willow Wood Series. This Award Winning series is based on legends of an underground secret society of women who use ancient magic.

Supernatural thriller, Jonathan’s Locket was a 2014 winner in the Readers’ Favorite contest, earning a Silver Award and a finalist in the Wind Dancer Film Contest. This Young Adult novel featured some of the island legends out of Grand Cayman surrounding the shipwreck of The Ten Sails.

Other works include Camp Cougar, which is the author’s first attempt in the erotica field. She has teamed up with a co-author to create this hybrid, humorous erotica.
Leona’s Legacy, a sequel to Camp Cougar has recently been released in January of 2018.

When not writing you can find Lorraine reading, beach hopping, snorkeling, or boating around the island with her husband on their boat, the Angelica.

I had always wanted to write and erotica as I had written a few sex scenes in my other books but wanted to go full throttle on this so I contacted a friend of mine who wrote redneck sex poems and we collaborated.

Tom’s eyes lit up when Leona pulled out a small peeled tangerine from her overnight bag. “Are we going to have a midnight snack?”

“A very sweet one for both of us, lover. I call this my ‘Tangerine Dream’. You’re a car salesman and know about sweetening the deal. Just enjoy babe.” Leona tore off two wedges. She set them on the bedside table and rubbed one wedge over her hardened nipples. She made sure to squeeze the extra juice and let it dribble down into her navel.

She jiggled her tits in Tom’s face, then rubbing her nipples across his mouth. “Mmmm, let me taste. His tongue darted in circular motions then he made slow sucks increasing to faster ones as he tugged at each nipple. “Damn, woman! These are the sweetest tits I’ve ever had!” He then let his tongue wander down her tummy lapping up every last bit of juice.

Leona was arching her back and moaning. After he finished savoring her body of the sweet snack she took the other wedge off the table and instructed Tom to open his mouth. She squirted some juice into his mouth. “Now that’s a good boy. Let’s see is if you can make these nipples even sweeter? I like it rough baby!”

Leona’s nipples were burning from the juices and the friction of Tom’s intense sucking. She raised his chin with her forefinger looking deep into his dark eyes. She loved watching those deep dimples pronounce. She ran her hand along his well- sculpted arms. They were firm yet his skin was smooth. “Now I want to be able to feel your mark for days.” She ran her hands through his spiky black hair and dug her fingers into his scalp. Her natural juices were flowing between her folds.

Leona pulled away. “Sore already babe?”
“No, it’s time for mama to get some sugar! Now sit on the edge of the bed darlin.” Leona parted Tom’s legs. She squirted some juice on her tongue with the other wedge and began to lick the inside of his thighs working all the way to his beautiful glistening cock. She began with light licks to the head and enjoyed the sweet scent and taste of the tangerine juice. She released to gaze up into his eyes, which confirmed he was more than pleasured. His soft moans were music to her ears. She licked up and down his shaft then grabbed the slice on the table and squirted more juice on the head letting it coat the entire shaft. Between the juice and her saliva she knew this big boy had to be well coated to receive the benefit of a deep throat. She lengthened her neck then took him in savoring all of his wide girth.

Tom gripped his large hands onto Leona’s shoulders. If his grip was any harder, she’d be through the floor. The pressure she felt was a sure sign of his ecstasy. His precum was now mixed with the fruit juices and Leona’s abundant saliva.

“I want to fuck you so damn bad! I know you are ready for me, too.” Tom knew he was close to coming and wanted to be deep inside Leona when he exploded.

Tom pulled Leona onto the bed and positioned her head against the wooden headboard. He parted her thighs with his knees and reached for the rest of the tangerine wedge on the side table. Leona watched him with greedy eyes. If this man is thinking what I’m thinking, he’s got it going on.

“I know your pussy is sweet enough but I hate to see a good piece of fruit go to waste.” Tom gently inserted his digits into Leona’s folds and found her to be warm and wet. He squirted the rest of the juice into her core and gently opened her up enabling his tongue to lap dance on her clit. Leona’s hips were gyrating. It was when Tom began rubbing her clit with the now dried up wedge that she was entering fruit Nirvana. “Damn it! Fuck me now! Fuck me hard!”

Tom couldn’t pull on a condom fast enough as he slid into Leona’s sweet spot and rode her like one of his first prize showroom models.

“I’m going to unleash my load now babe!” Tom was thrusting his cock deeper into Leona.

They both came together and Tom rolled over onto the bed exhausted. He flung his arms over his head. “That is the best fuck I’ve ever had!”

“You’re not too bad yourself, Mr. Strattler. Leona sat up and headed for the bathroom. “Meet ya in the shower.” Leona popped her head around the corner of the door.

Leona emerged from the shower sans Tom and ready to slip into bed with him. She was surprised to find him getting his clothes back on as she was ready to drop her towel she had wrapped around her. “Well, now you did pay for an over night stay. What’s the hurry? You do want to get your money’s worth, don’t you?”

“ I got mine and then some. I told Mrs. Strattler I was playing poker with the guys.”

Tom was putting on his shoes. “Sure.”

“Do you think I’d be here if she did?” Tom turned to her with a smile. “I’ll be seeing you soon, little lady. That’s one unforgettable pussy you’ve got there.”

And that’s just another dick satisfied. Leona reveled in another successful performance. She glanced at the clock on the side table. It was 1 am. She decided to just relax and enjoy the room since it was already paid for. She clicked on her phone to see she had a message from Sam Hudson.

Be the first to review “Leona’s Legacy by L..A. Carey” Cancel reply