You are here: Products Lazar’s Mission by Kevin Sterling 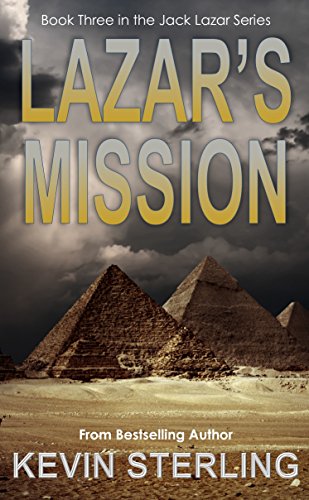 The Jack Lazar Series has it all from mystery and suspense to action, humor and romance

Jack heads to Egypt to investigate a crash-landed World War II fighter plane that was recently discovered in the middle of the Sahara. But something remarkable was left onboard, and people will stop at nothing to possess it.

But Jack soon finds himself in the middle of a hornet's nest as he becomes enthralled with Dalia, an exquisite woman of Egyptian and English descent whose father is the Egyptian Head Consul to the UK, not to mention a formidable covert agent with the Mukhabarat. The man's skills and weapons come in handy as he and Jack join forces to battle a faction that has plans to kill millions of innocent people and subject the world to their twisted ideologies.

A Race Against Time.

The trail leads to Northern Europe as all hell breaks loose. And before long, it's up to Jack and Jack alone to cheat death as he struggles to save Dalia, her father, and scores of unsuspecting people from the plot of a deranged madman.

Sterling and his wife travel extensively and live at their mountain ranch in Colorado with their Golden Retriever, Shelby.

So many things, really. But the biggest inspiration is the prospect of bringing joy and entertainment to other people’s lives. The author/reader connection is incredibly intimate, and it’s thrilling to share that with so many people. Then there’s the creative process of forming stories, inventing characters and bringing it all to life through fun writing, all of which gets me so excited that I can hardly wait to get to my study every morning. I know, in my heart, that it’s truly what I’m meant to do.