You are here: Products Lazar’s Challenge by Kevin Sterling 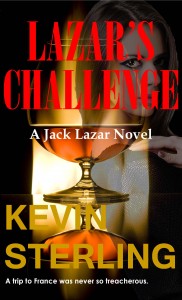 The Jack Lazar Series has it all from mystery and suspense to action, humor and romance

Jack’s best friend, Zachary Taylor, is roused out of bed in the middle of the night at his apartment in Paris and taken away at gunpoint, but not before he sends Jack a safety deposit key with a note saying he’s in trouble. If only he had given a clue regarding the location of the box, its contents, or what the hell is going on. Jack tries to call, but Zach’s cell phone goes straight to voicemail.

Clearly, something sinister is afoot in the City of Lights.

Jack heads for Paris to investigate, and in no time he’s accosted by the bad guys. But Jack Lazar isn’t the sort to back down, so he sets up shop in Zach’s Paris flat on a mission to solve the mystery and find his friend.

Sexy, French Flight Attendants Are Nothing But Trouble

Enter Michele – one of Zach’s many girlfriends in Paris. She’s upset to discover Zach is missing, but her idea of being consoled is to shed her clothes, plant herself in Jack’s arms, and mercilessly tantalize him. She’s ostensibly off-limits, of course, which wedges Jack between his growing obsession with her and his allegiance to Zach. It’s a sure prescription for disaster…and some really hot sex.

With a little ingenuity, Jack locates and opens the safety deposit box, but the only thing in there is an old bottle of Cognac. Still, it doesn’t take long before people are chasing after it, and they’re willing to kill for it, too. But the eau-de-vie is just the tip of the iceberg, and soon Jack finds himself working with French law enforcement and British Intelligence to stop something truly unthinkable.

Sterling and his wife travel extensively and live at their mountain ranch in Colorado with their Golden Retriever, Shelby.

So many things, really. But the biggest inspiration is the prospect of bringing joy and entertainment to other people’s lives. The author/reader connection is incredibly intimate, and it’s thrilling to share that with so many people. Then there’s the creative process of forming stories, inventing characters and bringing it all to life through fun writing, all of which gets me so excited that I can hardly wait to get to my study every morning. I know, in my heart, that it’s truly what I’m meant to do.