You are here: Products Lavender Days: A life-affirming Anglo-American affaire in Provence by Robin Squire 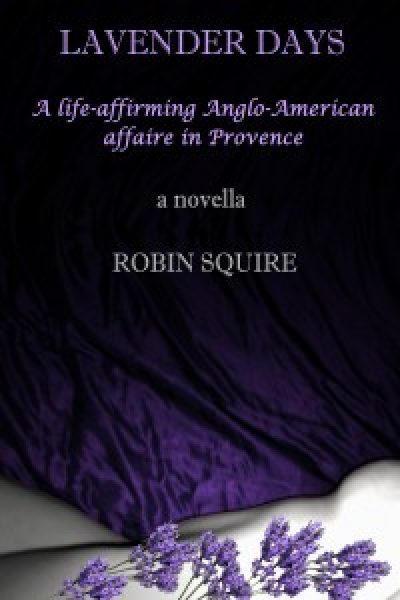 It started with an article he wrote for SHE magazine about his miserable experiences using dating agencies. Lavender Days is inspired by a real diary, rediscovered by an Englishman in his attic. The diary transports him back 20 years, from drab England in 2013, to an eventful hot summer in Provence with an American divorcée and her spirited young daughter. He vividly recalls his romance, the heady aroma of lavender in the air. For two people approaching midlife, disappointed in love, here was a first date to end all dates. However, she has an agenda. And why had he forced himself to forget?

I brought up my daughter as a single parent, which transformed me from being self-absorbed and insular by being the total supportive focus of another’s life. Being a freelance writer meant doing all sorts of diverse jobs to keep going, including a stint at BBC in London where played a monster in ‘Doctor Who’ (an Auton), the programme I was in is now regarded as a classic and I’ve attended autograph sessions for fans. Wrote and had published a book about a chaotic film I worked on as writer, during which I met a singer and began to vocalise with her in care homes for the elderly and infirm, which further opened me up to the needs of others, and also had the effect of helping me to lose my inhibiting shyness and learn how to perform in front of and address audiences. Always happy developing new ideas and characters for books and/or films. Recently wrote a novella based on some diary pages from 20 years ago I found in an attic. I believe in trying to be happy and that love really is all, however trite that might sound, that gentleness and consideration, not aggressiveness, are always more likely to win.

The rediscovery of a bag in the loft, containing a sprig of lavender, still aromatic after 20 years, and a holiday diary on which I based this novella.

Kathryn, with Jodi’s help, made a delicious veg and cheese flan, and we sat outside in the sub-tropical velvety balm and drank beer (cold) and had the pie. Wonderful. We three get on very easily, with no sense of strain or reserve. After, we walked up the road to a high vantage point and watched a ruby sunset over Avignon – then I had races and stone-hoisting contests with Jodi. Strolling back in the lovely air, as we approached the little house Kathryn briefly slipped her hand in mine and said “I’ve been wanting to do that all evening.”
Later, with Jodi abed in her tiny room at the back, I sat in the garden which is drenched with the scent of lavender, under an orange-gold full moon, and began to write this by the subdued light of an old-fashioned streetlamp planted there beside the seat and wired up to look like gaslight. Kathryn, writing her journal indoors, came outside to join me. I shrank away a bit as we sat knee to knee on the seat, sensing she was just being friendly and I wasn’t to take it wrongly and embarrass her with some stupid move. She brought wine out with her, and we sat sipping in silence under the moon to the lavender scents and cicada sounds.
I asked did she realise that this was our first date. She said yes, she was “very aware” of that, and was still “corticalising” the fact. Still we didn’t touch, despite her having held my hand earlier – maybe that was a mistake she was already regretting. Then she said she was having to come to terms with something she hadn’t “quite expected” – that she had already known from our correspondence and phone talks that she was attracted mentally, but now also finds that she is “attracted physically”. And I don’t know why I said it, maybe to keep the conversation going so I could unfreeze my senses, but I said that I never understood exactly what the American expression ‘petting’ or ‘heavy petting’ means.
She said “I think the best way to explain that is to demonstrate,” and leaned forward and kissed my mouth with her soft, moisty, perfectly-formed lips, and it developed into a powerful session that had my mind reeling and body raging. Still clinging, we went in the house, into her bedroom that overlooks the garden. Her casement windows were wide open, with no nets, the full moon looking in, and we stripped naked and hugged on her double bed, and did all except penetration as I hadn’t got any ‘protection’ handy, it had all happened much too fast for that. Yet she came, I made sure of that, though she was close to it anyway and it seemed like a huge catharsis for her, as if it had been bottled up for a long time as she threshed about like being strangled and then gave a great shrill of release, and I came massively too, between her large full breasts slithery with scent and sweat. Then I retired into the living room to my sleeping bag on the couch, first time I’ve used it, it smelled of new fabric, and I drifted asleep with my cock still tingling thrillingly and a smile on my chops.

Be the first to review “Lavender Days: A life-affirming Anglo-American affaire in Provence by Robin Squire” Cancel reply