You are here: Products Later Tonight by Tunde Ososanya 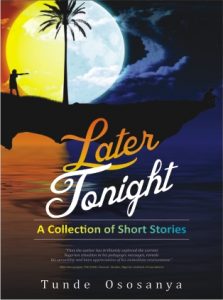 Later Tonight is a collection of ten short stories creatively written to reflect the present Nigerian society as objectively as possible. The book is an account of everyday life of Nigerians in a society abundantly rich and plagued by its blessedness.

The author carefully explores the dreams, hopes, and aspirations of Nigerians, either privileged or less privileged. We are made to understand in Later Tonight that love could either be irrational or complicated.

He unwinds by reading books, listening to good music, and watching movies. He believes that writers are change agents that are capable of changing the world through their writings. He currently lives in Lagos, Nigeria.

THE BURNING FOOD
Bolaji’s mien swiftly changed at the sight of Mr. President on the TV screen as though there was a contrived resentment for his Excellency. It was Independence Day, and the National Anthem had heralded his Excellency’s speech on the National Television. His Excellency spoke rather timidly, picking his words with constrained carefulness as if mindful of making blunders. His assertion that his administration had accomplished a lot in spite of the country’s sober mood hit Bolaji in the solar plexus as he clenched his fists in disgust as if he was going to punch his Excellency through the TV screen.
Bolaji was a First Class graduate of Accounting from the University of Ibadan, but a jobless husband and father of one. Unemployment was one of the country’s trademarks, and Bolaji was having a fair share of it. His academic records were enough to secure him a high-paying job, but not in a country where there was abundance of water and yet many were perennially thirsty. He oftentimes recalled when – about six months earlier, he went for a job interview at a bank and was disqualified on the basis of ethnicity. He was Yoruba, and had lost the job to an Igbo man with a Second Class Lower. His recent job hunt had the prospect of going well because he knew the company’s Marketing Manager, but little did he know that there would be a price attached to such assistance from the manager who happened to be his elder sister’s friend.
“See yourself as our company’s accountant, Bolaji. I’ve told my boss about you, and he’s ready to give you the job once you’ve been interviewed,” Aunty Susan had said.
“God bless you, aunty. I will be glad if it works out fine. I’ve been home for two years now, and I desperately need this job.”
“You will get the job. But nothing goes for nothing,” Aunty Susan said with a faint smile.
“How do you mean, ma?”
“What I mean is that, both of us will be having an affair before you secure the job.”
“That is impossible, aunty!”Bolaji had exclaimed, standing as if to walk out of the restaurant. “I’m a married man, and you are much older than me. You are my elder sister’s friend for crying out loud!”
“What has age got to do with this? If you need this job, age and infidelity shouldn’t be your problem.”
“I’m disappointed in you,” Bolaji said and stormed out of the restaurant. That was the last time he saw Aunty Susan and did not bother to call or visit the company because he was not called for an interview.