You are here: Products Land Sharks – A Swindle in Sumatra by Nancy Raven Smith 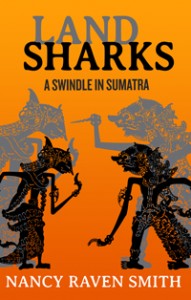 Land Sharks – A Swindle in Sumatra by Nancy Raven Smith

A bank fraud investigator goes undercover in Sumatra to find a young woman who may or may not be kidnapped. Her job might be easier if she didn’t have to deal with her boss’s untrained son and the unexpected appearance of an ex-boyfriend who has his own secret agenda.

NANCY RAVEN SMITH grew up in Virginia where she ran horse sport events. On her farm, she rescued horses, dogs and cats and is an advocate for animal rescue. Later in California, she traded her event experience for film work. Her screenplays have won numerous major awards. Raven Smith decided to write one idea as a novel and discovered a passion for writing mysteries. She is a member of Sisters in Crime, Mystery Writers of America, Women in Film, and Romance Writers of America.

A few years ago, I researched identity theft for a screenplay. It was a time when few people were aware of it. Since then I’ve been sensitive to the problems it can cause and the personal ramifications it can have on its victims. That led to a general interest in fraud. As the target of fraud is to acquire money or goods that can be cashed in, I thought who is more likely to be involved with it than a bank fraud investigator? That’s how my protagonist, Lexi Winslow, acquired her career. From there, I thought where do the wealthiest people who are likely to be targeted live. New York, Miami, and Beverly Hills came to mind. I knew Beverly Hills the best and chose it as Lexi’s workplace location. The fraud I used as the basis for this story is a more personal one that’s harder to diagnose than identity theft.

It must be around one in the morning. The bedroom is dark except for the pools of moonlight through the veranda doors.
The door lock clicks open and Andre steps in. He pulls the curtains closed. I’d forgotten how well he moves, light on his feet and balanced like an athlete. I guess constant running from the authorities will do that for you.
I flip on the light beside the bed. I’m fully dressed and waiting. Andre isn’t surprised. “Finally, Monsieur Van der Meer. I expected you earlier.”
“Ms. Winslow. Is that any way to greet an old friend?” He seats himself on the side of the bed.
“Is that what we are? Friends?”
“That’s not by my choice. I see you’re still wearing the necklace.”
My hand flies to my silver cross. I’d totally forgotten I had it on. I tuck it inside my blouse.
I twist out of his reach as he moves closer. “A call over the past two years would have been nice,” I say.
He tries to put his arms around me, but I push him away.
“You’re angry with me?”
I struggle to get my emotions under control. “That surprises you?”
“But you know business has to come before pleasure.”
My chest tightens. “Of course it does.”
He takes my hand. His touch makes my skin tingle. I snatch it back. I could lose control of this situation in a heartbeat.
“Are you armed?” I ask in an effort to distract him.
He nods.
“Do you have a spare?”
He reaches behind his back and hands me a Glock 17. “Take this one. It’s just like yours.”
How does he know that? I wonder. But I resist asking. I notice he’s wearing a shoulder holster with a second gun. Two guns? Andre rarely carries one. Something must have him worried.
“Are you expecting trouble?”
“This isn’t a safe place.”
“Then why are you here?” I ask.
“Van der Meer happens to be my favorite name, but it’s become known to several people I’d rather it hadn’t. I need a new one.” He looks at me warmly. “It conjures up many fond memories, but personal safety must come first.”
“If it’s fake documents you want, there’s a French woman and a beggar at the airport I can introduce you to.”
“Too late. I’ve already made my arrangements.”
Here? It would be nice if Andre could tell the truth for a few minutes, or is he telling the truth? I never know with him.
He leans toward me. “I’ve missed you.”
I lift the Glock before he can embrace me.
“You would shoot me with my own gun?”
I nod.
“Why? Because of that wet behind the ears pup next door? And don’t insult me by saying he’s your nephew. You don’t have a nephew.”
“What do you care?”
“I don’t like the way he follows your every move.”
“You stay away from him. He’s a nice boy.”
“This is what you’ve come to? Picking up an adolescent like that?”
“You’re jealous,” I say in surprise.