You are here: Products Lady Luck’s Cowboy by Gina Cole 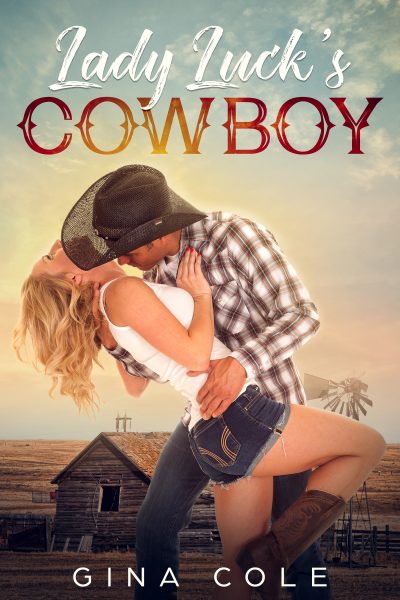 Charlotte “Charlie” English is a woman in a man’s world. As a mechanic, she spends her days slinging grease and torqueing exhaust manifolds. However, when the moment arises, she relishes the chance to dress up and look pretty at every opportunity she can. One night, while working on her project car, she wins a pair of tickets to the rodeo on the radio.

Jack Seguin is a competitive bull rider on the verge of making a life change. He’s tired of the circuit and his body can’t seem to take the abuse that his job provides. When he spots a young woman in the stands, he is struck by her beauty. Before taking his ride, he requests a kiss for good luck, surprising them both. He knows that falling in love, like bull riding, is animalistic. You go with the flow and see where it takes you.

For Charlie, it’s terrifying to let go of control and get carried away by impulse. Could happiness be where you make it? Could ditching the rules bring more joy that she could ever dream possible? Could it take eight seconds to fall in love with her cowboy?

Who I am:
Gina Cole is an alternate pen name for avid romance writer Ginny Sterling. She enjoys telling tales that tug at the heart.

About my books:
Writing both steamy Contemporary and Time Travel romances with a flair for the happily ever after. The Timeless Brides series is a fun, outlandish, group of sexy books that are designed to delight and surprise readers.

Why I write:
A true romantic at heart, every book is written with the idea that laughter and love go hand in hand. Try a book today and fall hopelessly in love with the characters created.

Being a Texas girl, there is something inherently sexy about a cowboy. I work (IRL) in Automotive, so for me – writing Charlie's character was extremely easy and fun. This book actually had a little bit of everything thrown into it, from my husband's personality to my best friend's nickname – it was a fun, fast, witty conglomeration that had me smiling and laughing throughout.

Pale eyes were locked on to hers. The cowboy had climbed onto his platform. And when he removed his hat to wave to the crowd, she was spellbound. Blinking, she quickly looked away and felt a flush creep up her neck. She wanted to melt into the floor in embarrassment and pretended to drop something. Kneeling down, just to get out of his view, she cursed the fact that she didn’t bother to really dress up nice. First impressions were everything but, then again, would she even see the guy again?

Charlie wished she had taken a moment to curl her hair or put it in any style other than the two French braids she currently wore. Her hair was split down the middle and braided tightly simply to keep it from being a mess. She never wore makeup, except lipstick. Cherry red lipstick was her weakness. She had tubes of the stuff everywhere: the empty ashtray of her car, the bolt bin of her tool box, a junk drawer in her apartment. And above all, she had a variety of tubes of retro red lipstick displayed on a small mirror on her dresser. She loved red and the classic look it gave. Thankfully, her coloring could pull it off.

Hesitating, Charlie heard Beth squealing and glanced up into the bluest set of eyes she had ever seen.

“Hi,” she whispered, staring at him. She was struck by the lopsided grin he gave her. She was fascinated by the way his tanned skin crinkled at the corners of his eyes when he smiled. His sculpted lips looked like something an underwear model would have.

“I’m Jack!” he hollered, holding out a hand. The other hand was holding on to the steel rail that surrounded the arena. His boots were perched on a rail and his eyes kept darting to the side as if he was expecting something.

“I’m Charlie!” she yelled back and awkwardly shook his hand, chagrinned that she had almost as many calluses as he had. It was hard to keep a good manicure when you were constantly tearing up your fingers on engines.

“Nice to meet you, Charlie!” His smile got even wider suddenly. “Got a little token of good luck for me?”
At that moment, she pictured a medieval knight at a joust asking for a ribbon from his lady. She wasn’t his lady, nor was he in a suit of armor. Blinking, she stared at him as she continued to hold his hand. Token? Crap! She didn’t have anything on her! No ribbon, no belt, no handkerchief or flower. She had on her a bare minimum to keep her day easy! A dress, the boots, her wallet and beer mug.

“No!” she yelled, completely chagrined and dismayed. Then it hit her. This was her win, this was her change of luck and her moment. “Wait! I have something!” Blushing, she took the hand she still held and left a perfect red kiss on the back of his knuckles.

The crowd around them roared in approval. Jack must have been surprised as well, because he pulled her forward and pointed at his cheek. Beth, who was screaming hysterically in excitement the entire time beside her began chanting:
Kiss him!
Kiss him!
Kiss him!
Others began to chant it and the announcer even mentioned it. Charlie felt herself blushing at the attention and knew that she was put on the spot by him. He was extremely handsome. Would it be so bad to kiss a stranger? Leaning into it, she saw the exact moment that his smile increased.

“Now, only good luck, Miss Charlie!” he encouraged loudly towards her.

“Maybe someone else should kiss you then! I’m not exactly good luck!” she laughed and saw he did as well. The roar around them buzzed in her ears and her heartbeat pounded as she smelled his cologne. She had yet to smell horse sweat, but whatever he was wearing made her knees weak.

Closing her eyes, she leaned forward and felt the heat of his cheek near her skin. Modestly pressing her lips on his cheek to leave a red mark, she heard him let out his breath in a whoosh the moment they connected. Like blowing out candles on a birthday cake, she made a wish for him not to get injured. It might not do any good, but it certainly wouldn’t hurt!

Opening her eyes, she saw a glimmer of interest in his just seconds before he leapt away into action. She stood there, like a princess peering over a parapet of a castle at the scene. Jack had one boot straddling each side of the pen and the door had opened behind him. He raised two fingers up and tipped his hat towards her as one of the news anchors shoved a microphone towards him.
“Jack Seguin! Jack! Tell the crowd what bull you are riding tonight!”
“Tonight, I will be riding Vamp. And when they yank that gate, I’ll be on for eight.”