You are here: Products Lady Heloise Heads to London by L. L. Neal 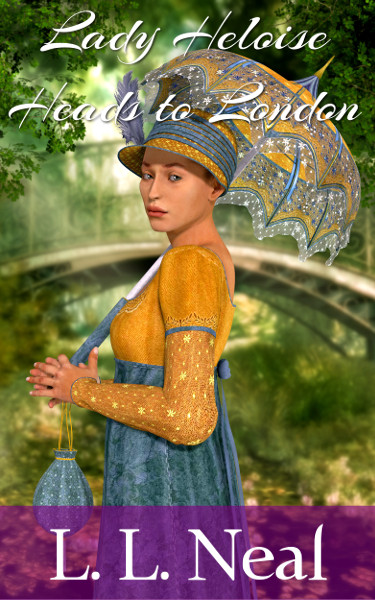 Lady Heloise is bound for London for the season. The lady plans to scorn social conventions in her seduction of Sir Jacob, Lord Heathwood. In her wholehearted pursuit, the lady doesn’t realize the impact of her scandalous actions.
As the season heats up, the lady finds that many gentlemen wish to court her. How will she find the man who holds the key to her heart amongst many cads, bounders, and rakes who only want her body, her dowry, or both?

L.L. Neal grew up reading romances and particularly loved Regency romances. She took up writing when the romances she was reading started to blur together and to look the same. Her first set of Regency romances, The Tumbling Green romances, are set in Regency times but with strong-willed heroines.
L.L. Neal comes from a family of eight and grew up with five sisters, giving her insights into how siblings do—and don’t—get along. LL Neal currently lives with her husband of seventeen years, two dogs, and two cats. In her spare time she’s crafty: sewing pillowcases for charity, knitting wool socks for family, crocheting lap throws, and quilting.

I wanted to finish telling all of the sisters' stories. This book came about at 3 am. I started writing and it kept popping up. I found myself snickering at some of my character's antics.

Chapter 1
Lady Heloise was to have her first London Season. She stared at her mama and then she stared at her twin, Tilda. Tilda was being pushy, and Heloise was about to tell her younger sister, by two minutes, what she thought of her attitude.
Two years before, her beloved sister, Charlotte, had married a Scottish lord and had disappeared off to Scotland with their child. She hadn’t seen her sister in two years and was missing her dreadfully. She wrote to her weekly, telling her about life at Trent House and in the village of Tumbling Green.
At the wedding of Charlotte to Lord Murdoch, Heloise had fallen head over heels in love with Jacob Ashbury, the Earl of Heathwood, Lord Murdoch’s best friend. She hadn’t seen him since the wedding, but she dreamed of him daily. She knew she was being silly—the man probably wouldn’t even remember her after two years. Tilda reminded her of this daily. Drat Tilda!
They were meant to have gone to London last Season, but Sir Henry, Heloise’s papa, had decided he needed a break from London and marriages. He had ten daughters and one son. Six of his daughters were married, Charlotte being the most recent one. He had always wanted grandchildren, and now he was blessed with many of them … he just never saw them. He sighed.
Heloise smiled. Finally, she was to have her Season upon the marriage mart.
Tilda just wanted to go to London to visit the museums. She claimed to not want to get married. She had stated flatly that marriage was just not what she wanted.
Heloise, on the other hand, wanted to get married and have a house full of children. She loved children.
Papa shook his head. He had no idea why his Heloise wanted a house full of children when she had grown up in a house with eleven children in it, but then again, the older girls weren’t that close in age to Heloise. Heloise and Tilda had been quite a bit younger than their older siblings and much older than the last child in the lineup. They had pretty much been left to themselves.
Heloise looked up from the magazine fashion plates she had been studying. “Mama, what do you think of this style of walking dress?” she asked.
“Hmm, let me see … oh, this one?” asked Lady Poppy.
“Yes, that one. Do you think Madame Celeste would make me one just like it?” Heloise asked.
“I know not; Madame is rather picky as to what she puts on her clientele. Bring it with you, and ask her when we see her,” Lady Poppy said.
“Tilda, do you know what kind of dresses you want?” asked Lady Poppy.
“I don’t want any dresses, Mama. I really do not want to get married, and therefore, I do not see the need for any,” Tilda stated flatly.
“Tilda Marie Summerhill, you are going to get new dresses, and you are going to have a Season! Do you hear me, my girl?” Lady Poppy said firmly.
“Oh!” said Tilda, astonished at her mama’s tone.
Heloise smirked behind her magazine. Finally, someone was putting Tilda in her place.
“Mama, when are we to leave for London?” asked Heloise.
“We are leaving next week, my sweet,” Lady Poppy replied.
“We are?” Heloise asked.
“Your maids will start packing tomorrow; we are going to be in London for the whole Season. Do not worry about reading materials for we can visit the booksellers, and we will be going to the museums, the opera … the modiste is first, though. I also want to go shopping on Bond street; we will need all the accoutrements for a great Season. It shall be so much fun being in London again. I had a letter from Theodosia saying that she will be in Town for the Season. It has been an age since I have seen her. I know you both are wanting to see her as well,” said Lady Poppy.

Be the first to review “Lady Heloise Heads to London by L. L. Neal” Cancel reply