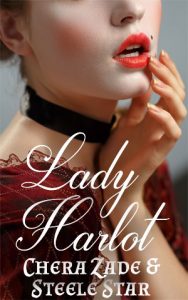 I had surprised myself with my unexpected courage. Here I was in one of London’s most notorious brothels, The Paradise On Earth, taking tea with the madam, Mrs Southwold. Discussing whether she would be kind enough to accept an inexperienced aristocratic lady such as myself to serve the clients here as a common harlot. Until the day before, I had not even heard that word uttered, let alone understood its depraved meaning.
I had led a sheltered life in the provinces. My parents shielded me from any influences which they feared might corrupt their innocent daughter before she was married. I was hardly able to read the latest novels, let alone enjoy male company. In the end, I just about managed to arrange an encounter with a local squire. I lost my maidenhood, but in such a rushed and unsatisfying manner that it left me even more frustrated than ever.
I confided my feelings to my cousin, Charlotte. She was ten years older than me and lived in London. When I was finally permitted to visit her, after years of pleading, this worldly and sophisticated woman proposed an immediate solution for my problem. Though I gasped out loud in shock and disbelief when she recommended it to me.
“It’s not such an uncommon situation for young aristocratic women to want to broaden their education in the pleasures of the flesh,” she said. “But it’s equally difficult for them to do so when they are guarded on all sides by overprotective parents. Or they quite rightly fear public exposure and humiliation if they are found out having relations with men outside the sanctity of marriage.”
“My dearest cousin, you describe my dilemma exactly.”
“There is a remedy,” she replied. “But it demands courage. One might even say daring.”
“Please tell me, for I think my yearnings will make me go mad if they are not met soon.”
“You might become a harlot.”
“What’s that?” I said. During my quiet provincial upbringing, I had never once heard the word.
“A woman who sells her body, for the sexual pleasure of any man who is able to pay for it.”
It was then that I gasped in outright shock. I had to draw in several shuddering deep breaths before I could respond.
“There are women who sell themselves?” I said.