You are here: Products Kydona by Thomas Krug 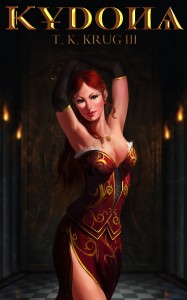 Named for heaven, the kingdom of Elessia once served as a beacon to the world. Now its name has become a byword for decadence. When Lord Prince Marcus hears the beginnings of a vast conspiracy from the lips of his dying mother, he sets out to uncover the motives lurking behind the war his father waged. With the help of Kaelyn—a sharp-tongued courtesan nursing a long-hidden desire—and Vernon de Gauthier—a near-disturbingly prolific womanizer with a weakness for apples—Marcus slowly unearths the truth: his country lies on the brink of collapse. And soon, the vanquished nation of Kydona will rise to settle a generation-old score.

In Elessia’s debauched court, the threat goes unheeded. Marcus’s romances bloom and just as quickly wither. Blood is shed, lives extinguished. It matters little. Quarrel and murder, lust and love, right and wrong—the lines that separate these are hopelessly blurred in the throes of court intrigue. And the difference between each rests on a knife edge so sharp that even a hero cannot tell them apart.

Thomas K. Krug III lives in Skippack, Pennsylvania with his beautiful fiancé, Caitlin. He studied Communication at the University of Scranton, Pennsylvania, only to quickly realize the futility of a career in newswriting, instead choosing to devote his writing skills to novels. When not whittling away at sequels, he’ll either be glued to his Xbox or sipping bourbon–always on the rocks. He put the finishing touches on his first book in Afghanistan, where he served as a junior officer in the United States Army.

Reading Fantasy, of course! I’ve been a fantasy lover ever since my early teens. After years of following my favorite authors, I decided to embark on a world-building expedition of my own.

Be the first to review “Kydona by Thomas Krug” Cancel reply