You are here: Products Klemondion: Redemption by Ed Benjamin 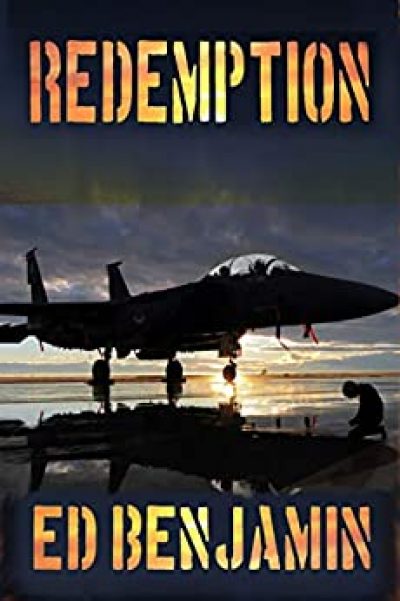 An orphaned teenager stands before three graves and in despair and desperation enters the United States Air Force as a driver. Inspired by the pilots he ferries to their planes; Harry rises in the Air Force to become a TOP GUN fighter pilot.

While flying his F-15 Eagle a Combat Air Patrol show of force mission over the border of Iran and Iraq, Harry’s wing man is shot down by Iranian Captain Zandi (also known as Mar) using an Top Secret experimental missile.

In the ensuing air battle, Harry displays amazing airmanship but loses consciousness, endures a life threating situation, and undergoes a near death experience. After the mission, the Air Force grounds Harry.

While he waits for the results of his medical evaluations, the Air Force assigns Harry to the Air Force Office of Special Investigations to help with administration. He soon discovers he has a natural investigative ability, but this does not keep him from falling into a pit of despair.

Faced with a fate of losing his flying career, Harry falls victim to the emotional lows, self-doubt, and anger. He relieves his frustrations and feelings of abandonment and loneliness with alcohol and an assortment of women.

Can Harry overcome his despair?

Will his love for Katie, a computer geek he meets on a case, help him overcome his despair?

But two burning questions override all.

Will he ever fly again?

Will he ever meet Mar in aerial combat to avenge the loss of his wing man?

And, if he does, will he finally find REDEMPTION?

Ed Benjamin retired from the United States Air Force in 1990 where he served as an aircraft maintenance supervisor. He currently works part-time as a proposal writer helping companies obtain business with federal, state and local governments. He also writes short stories and novellas; some of which he offers for sale via digital download. He is currently working on a full length novel featuring Harry Miles. For more information, visit Ed's website at
http://EdBenjaminBooks.com

Ed also publishes gratitude journals, wedding planners, reissues of classic novels, and other publications via his two publishing ventures at Bulverde Books and Front Porch Press. These works are available exclusively on Amazon via Kindle Direct Publishing. Ed is located on Twitter at @colbenjamin
Readers may contact Ed via email at [email protected]
Ed and his spouse live in Bulverde, Texas – also known as the "front porch" of the Texas hill country.