You are here: Products Kitten Around (Shifting Hearts Dating Agency #3) by Erzabet Bishop 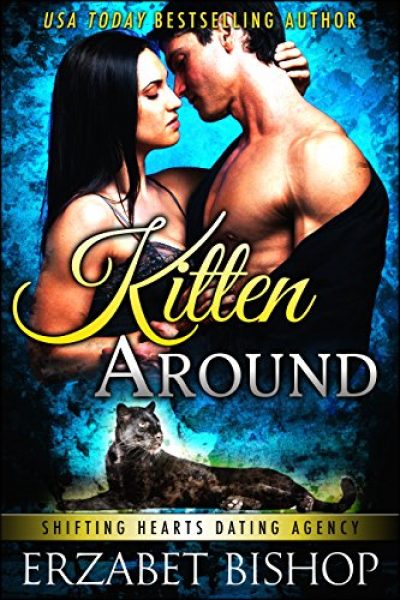 All work and no mate makes Paige a dull girl.
Paige is having a marvelous time playing at Ventures. After all, what girl doesn’t love a nice spanking now and again? On her own terms that is. A welcome reprieve from her work as co-owner of the Shifting Hearts Dating Agency, play is exactly what she’s looking for. In between dodging calls from her uber douchelord ex, avoiding conversations with her hormone ridden inner kitty about a super-hottastic dark eyed dominant, fixing up Bat girl, and getting ready for the charity auction at the club, she has her hands full. And, damn it, why won’t it stop raining?
His beast called to hers.
A storm is brewing in town but that’s nothing compared to the one in Tyler’s own life. Being surrogate father to his strong-willed niece, and running his own woodworking and restoration business, keeps him more than busy. When a charity auction at Ventures provides the opportunity to spend time tied up with the submissive both he and his cat have been lusting after, he can’t resist the call to do good and possess her at the same time. When unforeseen circumstances and a family crisis strike in the midst of a dangerous storm, Tyler has to come to terms with his inner cat and the mate that could be torn from his arms forever. Some things are worth fighting for, and fur is about to fly.

I had started working on Kitten with the idea that it would be centered around Ventures, the club in the series when Houston got an unwanted guest. Hurricane Harvey. So, Harvey got put in the book. lol. What would happen if a charity auction were ruined by a hurricane? Well, you get to find out.