You are here: Products Kissing The Scorpion by J.W. Tapper 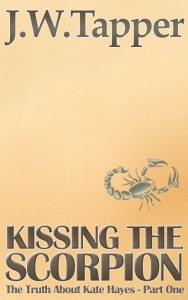 Kissing The Scorpion by J.W. Tapper

She’s everything he wants. Much more than he expects.

Dave Fletcher isn’t obsessed with Kate Hayes, at least that’s what he tells himself. She just happens to be the gorgeous blonde working at the opposite desk. There’s one small problem: Kate is his manager. She’s also old enough to be his mum.

Dave can’t believe his luck when he and Kate are booked on the same work event at a plush hotel. He is absolutely certain that nothing is going to happen, but why risk disaster by giving his girlfriend more than the most plausibly vague details?

Kate is a lot of fun once they get out of the office and she has it all: the looks, the figure, a flashy car and a big, expensive house. She also has some intriguing rules for their trip together, and a very revealing evening dress.

But what do you really know about the person who sits opposite you every day at work? One thing is certain – Dave Fletcher is going to find out way more than he expected.

Kissing The Scorpion is the first novel in the contemporary romance series The Truth About Kate Hayes.

Provocative, steamy, with a wicked sense of humour. That’s only part of the truth about Kate Hayes. How much more would you like to discover?

A desire to entertain inspired me to write. I created the character of Kate Hayes over a period of several months, before I had even started writing the series of novels where she is a central character. I wrote these books because I wanted to give her an world to live in that she deserved – an entertaining world where she can have a lot of fun… and always does.

Excerpt from chapter 8.
===================
Dave stood outside the door to room 3-17. He checked his watch: 19:54. He took a deep breath and knocked three times on the door. A few seconds later he heard Kate approaching the door, then it opened and she said something, probably “Hi”, but he was already lost, destroyed where he stood by a tactical strike of hair, eyes, makeup, boobs, legs and the most astonishingly abbreviated dress he had ever seen. He couldn’t help himself, he was no longer in control and, if he had been able to focus his mind in the appropriate direction, he would have realised that he hadn’t been in control for some considerable time.
He said, “You look amazing,” before he had even considered speaking or the implications of what he was going to say.
It had to be said.
To not speak, or to have said something different, would have been to fail, to ruin the moment.
Kate smiled politely at the compliment and glanced down at the front of her dress.
“I just hope I don’t give some old codger a heart attack. It didn’t seem quite this revealing when I tried it on in the shop.”
Frankly, Dave found that pretty fucking hard to believe.
Kate’s hair was piled up on top of her head with a few subtle ringlets hanging to the sides. It looked more like the work of a professional hair stylist than something that Kate had done herself in the hotel room. Her makeup was perfectly understated, some tinting to highlight her cheekbones with very precise and subtle liner around her eyes. Her lipstick was a dark shade of pink, glossy and utterly mesmerising.
There was a slim platinum chain around her neck, hanging down to the top of her very visible cleavage, and she was wearing a pair of matching platinum earrings – inch long chains tipped with tiny black gems.
But the dress!
He couldn’t believe the dress.
It was black, of course.
It had a halter top with the straps tied behind her neck; at the front the straps widened to partially cover her boobs, creating a devastating plunging V neckline that ended below her navel. At the level where there may or may not have been a bra – he honestly couldn’t be sure – there was a discreet horizontal strip across the V, breaking up the wide expanse of bare, tanned flesh. When Kate turned around and led him into her room he saw that the dress was virtually backless at the top, although not cut far enough down to completely eliminate the possibility of there being a strapless bra underneath it. The dress was very tight, very clingy and the hem finished about an inch below her buttocks. The bikini had shown more skin, just about, but this dress, oh fucking hell, it was…
Absolutely unbelievable.
He didn’t think Chloe would ever dare to wear something like that, even to a nightclub on holiday in a hot country very far away from home. It was difficult to think of anyone else who could get away with wearing a dress like that and Kate Hayes wasn’t just getting away with it, she was utterly owning it.
Dave followed her into the room and let the door close behind him.
She seemed taller.
He looked at her shoes.
They were strappy black sandals with high stiletto heels. Fuck me shoes Chloe would have called them, but only on another woman and that woman would probably be a bitch or a slut, maybe even a whore if she was particularly young and pretty, or older and devastatingly attractive. Like Kate.
The room had been kept tidy, although it now felt like Kate’s room. The various bags and their contents had been stashed away and there were no casually discarded bras or knickers lying around. Dave had looked around for some, he had to admit.
Kate opened a small, platinum sequined handbag and slipped her phone into it. She put the bag’s chain-strap over her shoulder and looked at herself in the dressing table mirror.
“Come here,” she said, turning to face Dave. She touched his shoulder, leaned towards him and kissed him very lightly on the cheek. “Thanks for letting me use your shower and for being a perfect gentleman.”
The feel of her lips lightly brushing his cheek was almost too much. Add in the soft pressure of her breast against his upper arm and he was totally immobilised. His head filled with the intoxicating scent of the perfume she was wearing, his mind subconsciously identifying various elements of the fragrance while he struggled to think of something to say: jasmine, musk, sandalwood, amber. The perfume was Sensuous Nude by Estee Lauder. Dave wasn’t a fragrance connoisseur, the bottle was right there on the dressing table in front of the mirror – round, pink, with the words Sensuous and Nude across the front of it.
Once again, you have got to be fucking kidding.

Be the first to review “Kissing The Scorpion by J.W. Tapper” Cancel reply