You are here: Products Kiss of Tragedy by Stephanie Van Orman 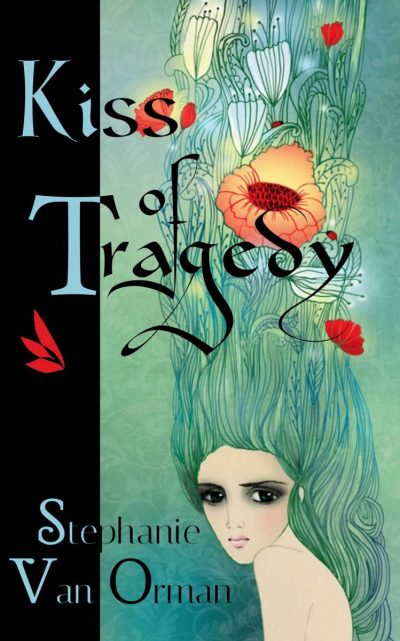 Not only does Juliet join an occult club, but she falls head over heels for a man who is a suspected vampire. Their romance would be perfect, but something strange happens when they kiss. When their lips meet, she’s thrown into a world where violence is normal, romance and danger are the same thing, and a simple kiss can lead to destruction.

Stephanie Van Orman began writing novels when she was 13 and has always had a very strong passion for novels. She lives in the forests of Vancouver Island on a permanent writing retreat. Overlooking cedars and pines, she plans her novels, exploring the very best ways to carry her readers to new heights of suspense, magic, and romance.

It is my hobby to find joy in little things and to blow them up like bubblegum for my novels. Once, when I worked at a university, a young man heard me called by my nickname, Perstephanie. He stopped and asked me if I knew the story of Hades and Persephone. I said that I did, though I might be fuzzy on the details. He stopped and told me the story in detail. I was swept off my feet and I thought that everyone deserves to be swept off their feet by that story at a university.

“What?” Juliet muttered, quite out of breath.

“Be real,” she said, closing her eyes and trying to brush past him.

“I am being real,” he said, clasping her elbow.

Her shoulders fell. “Are you saying you want to be my boyfriend?”

“Sure. If that’s how you want to classify the love you want, then sure, I’ll be your boyfriend. I’ll be whatever you want.”

“Weren’t you going to ruin me?”

“Better me than anybody else,” he said persuasively.

He faced her. “It’s true that I’m not a vampire, but I kiss like one.”

He warned her, so she should have been ready, but absolutely nothing could have prepared her for his lips. The fragrance from before, the spicy blend of leather and Paris, was gone and instead the taste of his saliva and the smell of his aftershave were like copper. Darkness enveloped her. It was as if her lips and nose had been lowered into a puddle of blood rather than been captured by the man she dreamed of. Her mind was flashing with images.

There was an image of the man she loved and his body was bleeding and dying at her feet. Falling to her knees, she was embracing him—encompassing him with the greatest love she had ever felt. His face was hidden from her, but it didn’t matter. She knew him by sense if not by sight. She was bending over him and kissing him for the last time as she had kissed him thousands of times. This was to be the last kiss and her heart was overflowing with the intensity of the moment. Her mouth felt full with blood and she was choking, like someone choking on tears. She swallowed and with each swallow, she was safeguarding and sealing each one of their sacred memories.

Then she was kissing Seth. He was the one from her vision, the one she crushed to her chest and ached to be near. Nothing made sense except that she loved him and she wanted him. She tangled her fingers in his hair and drew him even closer, but the smell of blood was strong and she began feeling faint.

She slipped from his arms and half fell to the floor. Seth cradled her and lowered her gently until she sat upright on the tile flooring.

“What happened?” she asked, putting her fingers to her face. It felt like there was blood dripping from the tip of her nose and dribbling down her chin.

“I kissed you,” he explained.

Juliet pulled her hand away, expecting to see her fingers stained with red, but they weren’t. They were white. In fact, her face wasn’t even wet.

“Kissed me back,” he finished for her. “You’re a phenomenal kisser, Juliet. I think I even saw stars. And I thought you were going to resist me. Now you’ll never be able to get rid of me.”

“I don’t want to get rid of you,” she mumbled, still confused about what happened. She had been positive that she tasted blood in her mouth. She felt around with her tongue, but she couldn’t feel any cuts. She even put her fingers directly into her mouth and touched her gums and cheeks, but there was only saliva.

“What are you doing?” Seth asked, laughing at her.

“I tasted blood in that kiss. Are you bleeding?”

He examined her with amusement. “No.”