You are here: Products Kiss Me Dead by Dale Ibitz 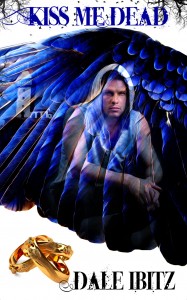 Kiss Me Dead by Dale Ibitz

Christian, a nineteen-year-old reaper-human hybrid enslaved to the Other World to harvest souls, earns his freedom by making a bargain with the Goddess of Death. As part of the bargain, he’s been cursed with the kiss of death.

The only way Christian can break his curse is for an angel to kiss him. Willingly. He finds Brooke, a nineteen-year-old descendant of a Naphil whose destiny is to hunt rogue reapers, suffocating in a semi-agoraphobic cocoon since witnessing a reaper steal her brother’s soul.

Christian has found the angel who can break his curse, and the seduction begins. To break her phobia’s hold, Brooke embraces her angelic role and makes it her mission to kill rogue reapers to avenge her brother’s murder. Christian can break his curse by kissing Brooke dead . . . but will she figure out his game and kill him first?

Dale’s a fan of hiking and the outdoors, and she never, ever starts the day without chocolate and coffee (preferably together). If you were to visit Dale’s house, you’d meet her husband, 2 kids, their dog Lea (most people simply refer to her as The Beast), their cat Luna (affectionately known as Loony Luna), a couple of loud-beaked parakeets.

It started with the movie Meet Joe Black. Brad Pitt made death seem so sexy that I want a piece of it! In the world I created, reapers are sexy and mysterious…it’s a tool they use to their advantage. I wanted a world where good boys do bad things, and bad boys do good things. It’s a dark world filled with death and pain and betrayal, but with a silver lining filled with hope and love.

“Hey, Brooke.”
She spun, clapping her hand to her chest. Christian straddled his motorcycle, having obviously morphed from a reaper boy to a stalker boy.
“What the hell?” she snapped. “You can’t sneak up on someone like that. I could have had a heart attack.”
He gave her a slow smile. “I hardly think a bike like this could be considered sneaky and besides, you’re not marked so I think your heart’s safe with me.”
Her eyes widened before she worked up a very un-cool sounding snort. Scratching her cheek, she turned her attention to his motorcycle. The bike looked like it came out of an old black-and-white movie, all rounded edges with flat-black paint. “You sure that thing’s trustworthy?”
“I’ll have you know that this is a 1964 Harley Davidson.”
She stared at him.
“You’re supposed to be impressed.”
“Got it.”
“You don’t look impressed.”
“That’s because it’s all rusty and old.”
He smiled, and his dimples winked at her. She parted her lips, her heart swooping aimlessly like a bat with kinked radar. Those stupid-hot dimples almost made her believe he was harmless, but he looked kind of dangerous on that bike, and he was a demon. Well, half a demon anyway.
She would not think about the subtle warmth radiating through her body.
No, that feeling was her rogue detector burning in her belly. She twisted her head; nothing but a few shadowy reapers floating aimlessly through the dark, and William and Abby having a major make-out session … nothing that resembled soul-snatching, though a chill snaked up her spine at the thought of Abby kissing an almost-reaper.
“What are you up to?” Christian gazed down the sidewalk, his mouth softening. “Besides saving kittens and feeding the homeless.”
“I’m waiting for Abby to get off work. You?”
He blinked and straightened. “No plans. Can I hang with you for a while?”
She glanced at Abby sucking face with William. “Um, let’s wait outside.”
Christian leaned against the wall. Brooke studied the half-dozen reapers pacing the parking lot and sneering while they ogled her. Tension mingled with the belly-buzz until she thought she’d implode.
“What’s up with all these reapers? There seem to be more than usual.”
“Being near you warms their cold bones.”
“Well, that’s not at all creepy.”
“You’re an anomaly to them. The stuff made of legends, something they haven’t seen in generations. They’re curious, not sure if they should be afraid, yet wanting to be near you. Most reapers are smart enough to keep their distance, knowing what you are and what you can do. I expect there are rogues who won’t be able to resist you, though.”
“Great.”
The silence droned for an eternity, and her palms started to sweat under his continuous stare even though, thankfully, his eyes glittered blue and not silver. She checked her watch. Abby should be ready to leave soon.
Her belly was really burning now, and her fingers itched. Brooke squeezed her fingers, dug her nails into her palms, and shifted from one foot to the other. Apprehension tightened her chest like a bra one size too small, biting into her skin, constricting her breath.
Watch, watch, watch.
Her inner voice pounded the word between her ears. A rogue was near. She searched the parking lot, her gaze coming back to Christian leaning on the wall next to her.
He smiled. Slowly.
Him? Was Christian the rogue she was supposed to watch? Despite her internal warning, the look he gave her made her toes curl and her heart clutch. She looked over her shoulder again.
He moved suddenly, pivoting her and pushing her against the wall. He leaned his forearms on either side of her head, his face just inches from hers. He lowered his lids, letting his gaze trail down her face and linger on her mouth. Heat exploded in the pit of her stomach.
God, how she wanted to melt into him.
He bent closer. His mouth was as close to hers as he could get without touching. His legs pressed against hers, long, strong, and lean. She closed her eyes and concentrated on breathing; his leather-sweet-spicy scent was very, very distracting.
“Do you have any idea how much I want to kiss you?” he murmured against her lips.
Her breath hitched. She wanted him to kiss her. God help her, she did, but he was all wrong and she shouldn’t be doing this but she knew she would. She was in too deep.
“Some.”
He brushed his lips along her throat. He moved to her ear, his breath tickling the skin on her neck. Her heart fluttered, her body trembling with wicked warmth. She licked her lips, wanting to do the same to his. He sighed, and his breath swept her lips. Warmth erupted through her chest and flooded her head. Her thighs trembled.
“So why don’t you?” she asked.
He pulled away in order to gaze into her eyes. “I can’t.”
“Why not?”
“I haven’t been honest with you.”
Her head was floating in a sleepy fog. One corner of her mind resisted the dreamy warmth, the bottom dropping from her stomach as his words sunk in. Brooke wasn’t sure if she was standing or falling or breathing. The only thing she was sure of was how the nippy air brushed her flaming skin, how her stomach was on fire; burning, burning, burning.
Watch.
Gasping, understanding clicked with the suddenness of a dead-bolt being shot home.
Brooke slammed her palms into Christian’s chest, and he jerked back.