You are here: Products Kinky Briefs, Quatro by Seelie Kay 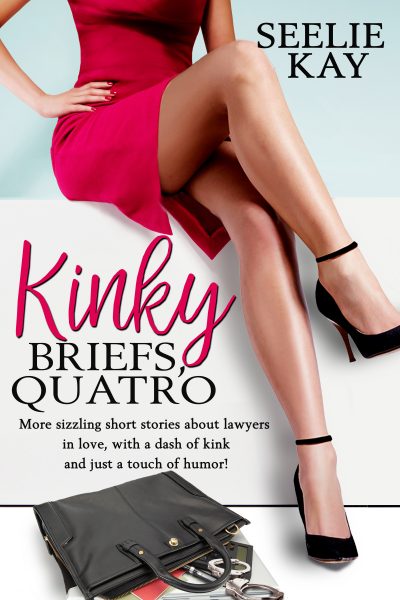 Take another kinky voyage through Lawyerland!
Indulge in a walk on the wild side with these sizzling short stories about lawyers in love, with a dash of kink. From painting well-hung nudes at a networking event or thwarting terrorists intent on harm to finding love despite a chronic illness or exploring kink on a train, these lawyers pursue love with a vengeance. And while affairs of the heart may come in all shapes and sizes—a law school ménage a trois, a middle-aged A.G. and a law firm associate, and a new marriage suddenly threatened by a spouse long believed dead—these relationships thrive despite the odds. You’ll laugh, you’ll cry, and yes, the resultant loin heating might even make you blush, but in the end, you’ll run out and buy a set of handcuffs. Because that’s the only way to defuse the sizzle created by these hot, sexy stories.

Seelie Kay writes about lawyers in love, with a dash of kink.

Writing under a nom de plume, the former lawyer and journalist draws her stories from more than 30 years in the legal world. Seelie’s wicked pen has resulted in six works of fiction, all released in 2017, including Kinky Briefs, Kinky Briefs, Too, The Garage Dweller, Kinky Briefs, Thrice, and A Touchdown to Remember, as well as the romance anthology, Pieces of Us.

When not spinning her kinky tales, Seelie ghostwrites nonfiction for lawyers and other professionals. Currently she resides in a bucolic exurb outside Milwaukee, WI, where she shares a home with her son and enjoys opera, the Green Bay Packers, gourmet cooking, organic gardening, and an occasional bottle of red wine.

Seelie is an MS warrior and ruthlessly battles the disease on a daily basis. Her message to those diagnosed with MS: Never give up. You define MS, it does not define you!

I have been writing since I was a child. My first masterpiece was a note to my Mom, informing her that I thought she was mean for punishing it. She later framed it!

I write sizzling short stories about lawyers in love, with a dash of kink After more than 30 years in the legal world, I must confess that the wickedness flowing from my pen is inspired by the men and women with whom I have worked or otherwise associated. Some I loved, some I despised, and still others, I barely noticed. As a former journalist, my powers of observation are strong, and many times I unwittingly catalog strange events and people, character flaws, and personality quirks only to have them reborn, but more pleasantly modified, in my stories.

Kendall rolled over and met with firm resistance. Startled, she looked up into Luke’s smiling face. He leaned down and kissed her. It was then she noticed they were skin on skin. “Oh. My. God. I’m in bed with my best friend and we’re both naked.”

Luke laughed. “About damn time. I’ve wanted to get into your pants for like forever.” He wove his fingers through her hair. “Think we can be lovers and friends?”

“I’m not sure. I never really saw myself with a tax lawyer.” Kendall smirked. “Boring.”

“Hey, you didn’t act bored last night when I had you tied to your bed.”

“That’s because you scared the crap out of me. I never even suspected you were kinky. Where the hell have you been hiding all of those whips and chains? I am sure I have gone through every single drawer and closet in your bedroom, repeatedly, trying to find evidence you preferred men.”

Luke’s mouth dropped open. He then launched himself at Kendall, pinning her underneath him with his body. He kissed her, then trailed his tongue down her neck, his mouth finally settling on a nipple. Gently, he began to suck, and when Kendall moaned, he bit down.

“Be happy I’m not getting one of my whips out to punish you, smart mouth. But nipple clamps are still an option. And maybe next time, a ball gag.” He chuckled, a low, somewhat evil, chuckle. “And as for my toys, look under your bed.”

Be the first to review “Kinky Briefs, Quatro by Seelie Kay” Cancel reply