You are here: Products Kindred The Alexa Raines Chronicles by J.L. Masters 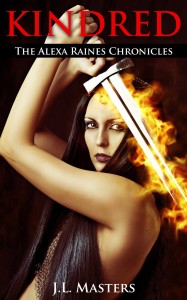 Book 2 of the Alexa Raines Chronicles.THEN:

4000 years ago she was sold by her parents to serve as a temple maiden. The priests forced her into a sacred ritual which painfully transformed her into a human phoenix. A creature that cannot die.After rebirth, she was furious and murdered the priests with her new powers and ran away. Wandering for years, she was found by a “wizard”, someone well versed in the arcane magical arts, and she taught her what she truly was, gave her a secret name, and taught her magic over the course of decades.

NOW:Alexa Raines died saving her lover from the deviant creatures who tortured and abused so many hapless women in search of power and pleasure.

Alexa has resurrected now and is looking for serious payback against those demons. She will travel across worlds to exact her special blend of bloody justice and woe unto any who stand in her way!

Be the first to review “Kindred The Alexa Raines Chronicles by J.L. Masters” Cancel reply