You are here: Products Kindred Hearts by Grace Lowrie 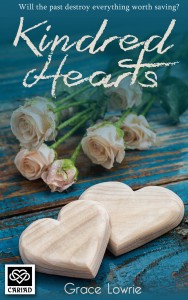 WHAT IF YOU FALL IN LOVE WITH BROTHER/SISTER TWINS?

When the enigmatic twins from Natasha Graham’s childhood sweep back into her life and draw her into their glamorous world, she is seduced by a potent cocktail of love and sexual desire. But Sebastian and Celeste Walker are two sides of the same coin, darkness and light and everything is not as perfect as it seems. Can Tasha make the right choice when it comes to her heart? Or will the past destroy everything worth saving?

Writing was my first love back when I composed poetry and short stories as a child. Since then I have worked a variety of jobs, run my own garden design business and travelled the world. Now I am rekindling my original passion by writing contemporary romance novels in Hertfordshire, where I also help out with the family business, explore the countryside and bake cakes.

I wrote my debut novel Kindred Hearts because I found I had fictional people, specifically the twins Sebastian and Celeste, living in my head and it was a choice between going mad or putting pen to paper. I honestly felt compelled to write their story and I revelled in the process so much that the dark winter months positively flew by.

For as long as I’d known Sebastian, there had always been a part of him that was content to watch from the shadows while his twin danced in the limelight. And as mysterious and sexy as it was, I couldn’t help worrying that there was something wrong – that he might be unhappy underneath it all.