You are here: Products Killing The Blood Cleaner by DAVIS HEWITT 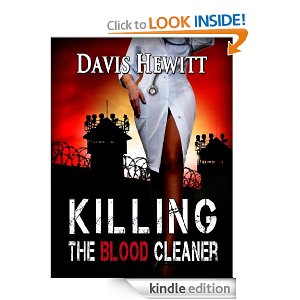 In Killing The Blood Cleaner, Dr. Jack Randolph has a golden and riotous existence as a young society doctor in Atlanta. His world is filled with sensuous women, private clubs and all the entitlements accorded to Atlanta’s elite. Such privilege turns his discreetly required resignation from the Centers for Disease Control into an opportunity for entry into a lucrative private medical practice. Jack looks forward to his upcoming trip to the luxurious Cloister Hotel on Sea Island, Georgia with his lithe fiancé, Annabelle. On the Coast, two women have beautiful dreams of a more glorious existence. Cindy Jessup understands Jack’s world and craves to be released from the web of murder, lies and corruption which is her daily life in her work with Sheriff Roger Odum. Her real desire is to somehow find a way to be a lady in Atlanta and Jack could be that ticket. Nurse Tacy Crandall wonders about her future and shudders at the day she narrowly missed being raped and murdered by inmate Henry Kirk at the Georgia Maximum Security Prison in Lester, Georgia. Her friends warn her she could still end up like the unfortunate female doctor who took her place that day and urge her to quit and find a job in Atlanta or Savannah, where there would be men who could fully appreciate her intelligence and charm.