You are here: Products Killing Matt Cooper by John Cassian 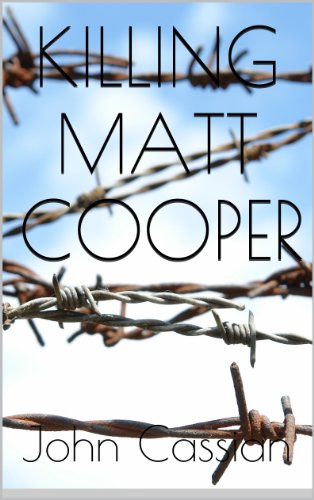 A harrowing, first-person chronicle of a serial killer/rapist, KILLING MATT COOPER leaves out no details — no matter how excruciating.

John Cassian is a screenwriter by training. This is his first novel.

I raped the love of my life.
You could say it was the “trigger” moment for me, the moment that set me off for good. Not her rape, nor when I strangled her to death, 7 years ago. But a tiny moment just prior to either. And my trigger had actually been building for quite some time. She was the love of my life, after all. And that was in actuality the second time I’d raped her (the first time being another 4 years prior). It was the time 7 years ago, though, that sent me hurtling down my path of black and blood. My path of loneliness and dark.
I’d been meandering around the first steps of that primrose path for quite some time. Prickling my fingers on its darkness. Trying to find my own way in. But it was when I raped and killed her — and that was my first kill, My Love, the love of my life — that I simply realized who I was meant to be. There was a thrill and a rush and a feeling in that blood. A feeling of warmth. A feeling of closeness. A feeling of attachment.
A feeling of love.
The sight of her soul pouring out her eyes and rushing up to heaven was one I’ll never forget. Or perhaps her soul went down to the Fire below.
You never knew with women like her.
She was my first kill — My Love — and you could say that, ever since, I’ve been trying to find her again. And again. It’s the same every time. I’m walking down the street, or driving my car; picking up groceries, or shopping at the mall. I’m wearing one of my disguises. No one ever notices me, which is perfect in my line of work. If you pass me on the street, you won’t take a second glance. People tell me I look white, Middle Eastern, Siberian, Venezuelan. I can dye my hair and don any kind of facial hair I choose. I look good bald as well. On the prowl…
And then I spot Her.
I know it’s Her the moment I lay eyes on her. She’s been on my list a long time. She’s so much like My Love. The stars in her eyes. The warmth in her honey-gold smile. The slim and athletic sway in her hips. The cheating lies she tells to one, two, even three men; the lies she tells to her children and to her family and to her friends. It’s like everything about her is slow motion and warm, with glowing lights that float around her face. But then the lights start to burst like star-flares, as her lies build to golden crescendos in the air.
Last night She was Ashley Monahan. Ashley was pretty and blonde, in her mid 30s, with glassy green eyes that she liked to slut up with smoky makeup. She loved hoop earrings and halter tops. Tonight’s top was elegant and white silk. Sleeveless. Ashley’s motherly hips fought against her party-girl-tight slacks. She still wanted to be that party girl.
Ashley Monahan was just my type.
I watched Ashley tell her professional wrestler boyfriend she loved him before going home to her husband and two children. Even though I wanted to tell Ashley, simply, that professional wrestling was fake (and, by extension, that her boyfriend was not real), I knew that that would not convince her. Ashley knew full well that her husband and children loved her. She kissed them all, but refused her husband’s sexual advances except for “their night” once a month. She had moved on from their love, though she still faked it.
I watched Ashley all last night from across the street, with my binoculars. She was awake, and restless, but when her daughter Pilar came into the master bedroom — scared from a nightmare — Ashley got annoyed and pretended to be asleep; and let her husband cuddle Pilar back to sleep.
Early in the morning, Ashley snuck out of her house to meet her boyfriend again. She’d been texting him in the bathroom since 4 a.m. She just couldn’t get enough…
But Ashley never met her boyfriend this morning. Because I found her first.