You are here: Products KAYOS: The Bad & The Worse by Tracy A. Ball 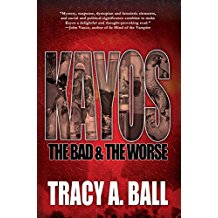 KAYOS: The Bad & The Worse by Tracy A. Ball

Lareina Elliot discovered her idea for making students loyal to the government is being implemented to further the war. It has become her life’s work to undermine that effort.

Agent Christian Deverell promised to protect Lareina, always. But, that was before he flipped sides, before their history got dirty, before he commissioned her adopted brother to assassinate her.

Cpl. Silas McKade never misses. He has a death warrant for Lareina—the woman who means everything to him—and a soul full of hatred for Christian—the man he wants to be. He’s either going to break Lareina’s heart or stop it altogether.

Novelist, Reviewer, Content Editor, Blogger, T-shirt Wearer, and Professional Snacker; Tracy A. Ball is a native Baltimorean and a veteran West Virginian whose family is blended from three cultures. She has opened her home to foster children, drug addicts, AIDS victims and anyone who needed an assist. She knows people who have committed murder and people who have dined with the Pope.

Which is why she writes sweet stories about tough love…and takes naps.

I had the opportunity to spend time with some supposedly limited children -who weren't limited at all! Their creativity and proclivity to get into trouble was awe (and book) inspiring. I think as adults, we miss some miracles because they don't fit the image. They're too smart for it. I have also had the very fun experience of witnessing a few power couples working opposite ends of the game.

Only Lareina would stroll down a blind, back alley, toward a loaded weapon, wearing stilettos. Christian couldn’t remember a day when she didn’t look good. He’d never admit it, but he’d been agonizing over her since the hospital. He had been worried. Hell, he missed her. And there she was: purple top – too low in the front, dark jeans- as tight as can be, dangly earrings, glossy lips, an arm full of bangles, and those damned sexy-ass stilettos.

Armed with an air of supreme poise, Lareina came forth. “Get in the car, honey.” She ruffled Alec’s hair but didn’t stop until she stood directly in front of Christian. His gun was less than three inches from her heart.
Alec hadn’t moved. She hadn’t expected him to, but it was worth a try. No matter. Now, that she was there, he was safe enough.
“What are you doing here, Lareina?” Christian lowered his weapon.
“Getting my child. What’s it look like?” She had the nerve to grin. “How did you find us?”
He arched an eyebrow at her and cast a speculative glance at Alec, exaggerating the act long enough to make sure she noted it before he let the topic go. “What did you want with Jeri?”
“Jeri’s a bastard.”
“No shit, Sherlock. Tell me something I don’t know.”
“It was news to me. That M-F’er has been stealing my files. He sold me out. It seemed prudent to find out some particulars.”
“It wasn’t to the Government because you’re a criminal?”
She pursed her lips at him.
Not the government. Then who? Something started to click, but Christian couldn’t finger it. “You know I’m taking you in, right?”
“You can’t. Not today anyway.”
“Why not today?” He could hear them coming.
So could she. “Because my son can’t drive.”
“Yes, I can.” If they wanted to pretend this was normal, Alec was cool with it. Lareina glanced at him, affectionately. “Not legally.”
He gave an indignant huff. “Because that matters.”
“Lareina.” Christian didn’t have time for this shit.
“Christian. I’m getting my child out of here.” There was no mistaking the resolution in her tone. “If you want to shoot me, you’ll have to do it in the back.”
He leveled her a mean look.

“Mr. Deverell, sir.” An officer came into view. Two others followed him escorting Jericho Parks.
“That’s her!” Jericho pointed. “That’s her! She did it. She’s responsible. I want to press full charges! She was behind it all!”
His outburst made up Christian’s mind. He raised his weapon and unloaded three caps. Like dominoes, the DoP’s went down one after the other. Jericho screamed. He fell to his knees and covered his head. Christian studied Lareina. “Three days.”
He watched her eyes dart to the left in that telltale manner.
“I’m going to need at least a week.” Urgency caused her voice to rise.
“You’re only getting three days.” He was in no mood to bend. Three soldiers lay dead. He had compromised enough.
“Fine. I’ve got to go.”
One hand extended, gun still pointed toward Jericho, in the event he attempted to run, with his other, Christian grabbed Lareina’s arm, pulling her to him. He put every ounce of his frustration into his kiss. It was either that or break her neck. And he was strongly contemplating the latter.
Lareina allowed it. She wanted, craved his touch as much as he craved hers. Theirs was a dance with the devil; irresistible and impossible. The tangles had become knots and he only gave her three days. It wasn’t enough. She could hardly wait.
The kiss ended, but the intensity remained. He sighed, letting the heat recede.
She whispered, “I have a pretty long to-do list, Christian. Unfortunately, you’re not on it.”
He licked the corner of her mouth, matching her tone. “I am the list.”
She pressed her cheek against his lips. “Well, you’re not getting done tonight.”
“Don’t fool yourself, Lareina,” he said. “I am going to have you.”
The absolute authority rippling through the huskiness in his voice made her nerves tingle with anticipation. It was a future fact. The next time, they wouldn’t be in the middle of a shootout. There would be no high emotions or weak moments to blame it on. It would be intentional. It would be permanent.
Summoning strength he didn’t like to utilize, Christian pulled back an inch, tugging on her bottom lip a moment longer. “Don’t stop.” His eyes were serious.
“Be careful.” Her eyes were worried.
With nothing more to say, she turned, moving away as fast as her stilettos would allow. Alec fell into step beside her. They were in the car, backing out and pulling into traffic when they heard a noise. It sounded like a gunshot.

Be the first to review “KAYOS: The Bad & The Worse by Tracy A. Ball” Cancel reply