You are here: Products Karma by Nancy Deville 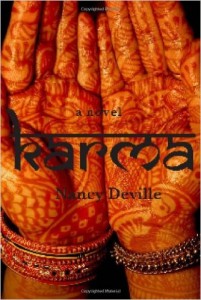 An edge of your seat psychological thriller. Karma takes you into the unimaginable horror of sex trafficking and heroin addiction. When a beautiful American doctor is kidnapped in Istanbul and trafficked to Mumbai, she endures the unthinkable in a forbidden world where sex is key to survival and plans for escape are the only way to stay sane.

Nancy Deville began her career in the 70s as a hippie clothing designer. From 1980 to 1990 she was a costume designer and stylist for TV commercials, taking a two year hiatus to design and manufacture felt her appliqué Christmas stocking designs for major department stores such as Saks and Neimans. Since 1990, Nancy has written best selling health books. She is a weight-loss and anti-aging expert. Since turning 60 five years ago, Nancy reevaluated her life and what she wants to spend her time doing. Nancy loves making up stories, and telling stories. Although she still wants to help people be healthier, and she is especially interested in helping older women live killer third acts, at the same time, she wants to live her own killer third act by doing what she loves most. A long-time yogi, Nancy is the founder and director of Yoga for Incarcerated Women http:// www.yogaforincarceratedwomen.com/, a volunteer group that takes yoga and meditation to women serving jail and prison sentences. Nancy lives in Santa Monica, California with her whippet, Scarlett.

I was a hippie hitchhiker in 1968 and traveled overland from Europe to India. All the hippie girls knew that we had to be careful about “white slavery,” though no one, especially me, ever was. When I decided to be a writer in 1990 I wrote the first draft of this novel. New York editors scoffed at my story and made comments about how sex trafficking wasn’t realistic and that my character was “stupid.” Knowledge about the subject has come a long way and now it’s common knowledge that millions of women and children are trafficked. I wanted to write about an educated, privileged American woman, so that it would be up close and personal.

Medicine is a system that processes human beings. Rich and poor, stoics, pragmatists, deniers, liars, and hypochondriacs—they all get processed. I thought about this some time after I was raped. Once I had the luxury to think beyond my immediate survival, I realized that what had happened to me was no different than what doctors like me do to patients in hospitals. I was being processed through a system.
It didn’t matter that I was wealthy, educated, and American. I could have been one of the poor ignorant gypsies I’d seen at the bazaar in Istanbul. The process was rape/conditioning. Until I was abducted, I thought things like that only happened to poor Eastern women—not to women like me. But I was wrong, and my life changed the instant the rape began. I was reminded of the innocent people whose lives changed when I spoke the words “stage four cancer.” What terrified me most was how ill prepared I was to deal with the cruel hijacking of my planned out life. I suppose my terror was no different than the fear of those who are freshly diagnosed as terminally ill.
Fear is primitive. I learned that from my father, a corporate law litigator. His militaristic training that passed for parenting enabled me to get through the stress and fear of four years of medical school and one year of internship. He hammered into me how to keep a cool head during a crisis. Do not panic. Breathe deeply. Be realistic. It was unreal, actually, the way I remembered and was able to act on the lessons my father taught me. First of all, having been told my entire life to accept, accept, accept, I did not deny what was happening to me. How could I forget my father’s credo? He would look at me eye to eye, and only when he saw the light of recognition flash in my eyes would he straighten his spine — rising to the full towering height that had intimidated legions of plaintiffs—and bellow, “Then deal with it.”
When I think about it now, I’m sure that even Dad would have given me credit for “dealing with it.” I could have easily lost it. I knew from medical training that the instant the fear signal reached my brainstem that neurons informed the amygdala lodged deeply within my brain’s temporal lobe. This primitive ganglion of my limbic system alerted my adrenal medulla to shoot epinephrine into my bloodstream, tripping my blood pressure and heart rate into high gear. I experienced tachypsychia, a neurological phenomenon of time distortion, which slowed events and heightened my perception. My heart rate ripped to its tipping point. Once over 145 BPM I would begin to disassociate. To maintain control, I started survival breathing, what my father called “ream the other guy” breathing. Four counts in. Hold for four. Exhale four.
During the rape, I was hyper-focused on staying alive, on avoiding any movement that would cause the icy cold razor switchblade pressed against my neck to slice through my pulsing carotid artery. I analyzed every possibility to gain an advantage over my attacker, including fighting back as soon as the razor was safely away from my neck. It was a nice try, as Dad would have said, though it gained me nothing but three cracked ribs. Even seriously injured, I had reached in vain for the blade when it lay in the rapist’s slack hand as he dozed, his body a dead weight on top of me, his long black hair flopping over my face as he snored, filling my nostrils with the sickening sweet smell of his oily scalp, and the rankly sweet odor of licorice on his breath.
Only those suffering from acute post-traumatic stress can understand how the mere scent of things so benign and seemingly pleasant as candy and flowers can produce hallucinatory torments so profound that reality and sanity spin out of control.
But I am getting ahead of myself. Like many stories, mine will end with conclusions, leaving some frayed ends that will likely fester into more heartbreak and even greater frustration. This again was really no different than what occurs in hospitals. Through various tests, doctors gather as much evidence as they can. They knit together as many bits and pieces of history as they can garner. They reach conclusions. A series of actions, they are the means to an end to heal the patient. Sometimes a patient has no other choice but to come to terms with an end result that is far from optimal. But I have seen with my own eyes the lengths that humans will go to accept. That’s the purpose of writing my story down. Memoir or a confession, you must decide. Regardless, this recording of events is part of an effort to heal, despite a less than optimal end result.
You see, I’m damaged and feel like an outcast. All I have to cling to now is the hope that Dad was right, that if I could just accept . . . then maybe I could move on with my life.

Be the first to review “Karma by Nancy Deville” Cancel reply