You are here: Products Justified Deception by Patricia Watters 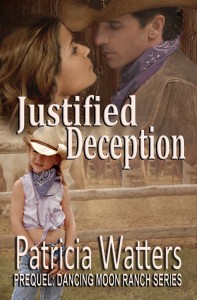 Ruth’s on a quest to find her daughter who was kidnapped five years before. Ruth’s private investigator is all but certain that ranch owner, Matt Kincaid’s, adopted daughter is Ruth’s child. But even though Ruth lands the job as nanny to Matt’s six-year-old daughter, she must tread carefully because Matt’s the maverick in a powerful family of lawyers and politicians and she can’t predict what Matt or his family might do if the adoption’s challenged. However, Ruth’s carefully laid plans go awry when she finds herself falling in love with the man who might have stolen her child.

SKU: B0050CQ6ME Category: Westerns Tags: AND SHE'D NEVER FELT MORE DECEITFUL IN HER LIFE..., SHE WAS LIVING A LIE FOR THE SAKE OF HER DAUGHTER
360 product view

As a kid I hated to read and avoided it if I could, but I loved to write, so whenever there was a writing assignment at school I gave it my all. I also loved the Saturday movies, and Tarzan was my introduction to the concept of hunks. Now, I live in a log cabin located on thirty acres of evergreen forests in the foothills of Oregon’s Coast Range. Still loving to write, I spend my time living a life of romance and adventure through my fictitious characters, and the hunks are in my stories. Although writing is my number one love, over the course of my lifetime I’ve raised laying hens, milk goats, and Tennessee Walking horses, built, plumbed and wired three houses, been a professional photographer, written photo essays for national and international publications, and slept outside under the stars for one whole summer. I currently have 25 books available on Amazon, 13 of them in my Dancing Moon Ranch series, and I’m about ready to start writing the first book in Cajun Cowboys, another contemporary western romance series. I love hearing from readers through the contact box on my website, and I respond to all notes.

The inspiration for Justified Deception was a line-up of posters of missing children at Walmart in McMinnville, Oregon. I found myself stopping to read the posters every time i went to Walmart, while also wondering how a parent could ever come to terms with a missing or kidnapped child, so I decided to write my own story.