You are here: Products Just you, me and a secret by Ganga Bharani Vasudevan 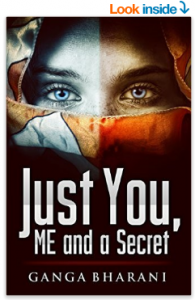 Just you, me and a secret by Ganga Bharani Vasudevan

Meera wakes up after a terrible accident with no memory to herself. She sees a stranger in the mirror and seems to be living with another stranger, Ashruth.

Before she gets used to responding when she is addressed ‘Meera’, Ashruth dumps her with a story that he says is her past. He claims that they were so much in love with each other and that they were engaged.

Armed with what seems to be her personal diary, Meera tries to grasp her identity and her reality. But no matter how hard she tries, she just seems to be unable to connect.

Will Meera ever regain her memory?

Will she fall in love with him the same way?

What makes her fall in love with Santhosh, her cousin?

Will she choose to stay and battle this through or will she run away to start a life afresh?

She works with an MNC as an IT developer, makes short films for fun, and blogs at Scribbledbygb.blogspot.com.

One night before I fell asleep I had a thought of how it would be if I woke up with no memory. That thought led to this book.

Pitch dark. Extreme silence. Time had ceased to exist. Felt like vacuum. A peculiar noise of beeping rang through the room. I could see nothing else but a blur of green floating at a distance, illuminated with dim light. The beep intensified and the image brightened. I gasped, feeling cold air brushing all over my skin. I swallowed. It felt great. I swallowed again. I didn’t know if I had even swallowed in ages. Again the same darkness spread all over but the beep became louder and came from somewhere very close. I breathed in a little more and swallowed again. My index finger moved very lightly without requiring my conscious effort.
The blurred sight flashed for a second in front of me. After a few flashes, the sight became clearly visible. A green curtain, at a distance, was swaying a little. I slowly looked up and a clock showed 11:55. It was too bright with tube lights making it almost impossible for me to figure out if it was five minutes to noon or midnight. I lowered my pupil and skimmed the green screen inch by inch. Green. Green. Green. I looked to my right. I looked to my left. Everything was just the same; green screen.
I tilted my head 90 degrees towards my right, lying in the same position in the bed. It was an ECG which was beeping. I swiftly brought my hands over my nose but wasn’t able to reach the skin of my nose. An oxygen mask was fixed over it. I pulled it down as I tried to get up from the bed. The sudden exposure to a different atmosphere made my respiratory system cough out to balance the change. The rectangular screen covered area around me cracked in one corner and someone hurried from nowhere.
‘Relax’ he made me lie on my back facing the ceiling; same position as before. He mounted back the oxygen mask over my nose. I was forced to stay put. I was too weak to rebel. He slid his hand into the pocket of his white coat. When his hand reappeared, it held a syringe with a yellow liquid filled to its half.
‘This should be a hospital’ I finally realized seeing the white coat and the syringe. ‘Why am I here? How long have I been here?’ Before I could think further he pricked me with the needle. He quickly disappeared into the crack in the screen, from where he had come into the “screened” area.
All green, again. The beeping sound started fading. The sight of the screen started blurring out. Light dimmed gradually. Pitch dark. Extreme silence. Felt like vacuum again.
I had no idea how many hours or days or even years had passed since my lapse into nothingness, again I could feel my index finger moving without my conscious effort. I heard some noise. Not the beep that I could recollect, so I expected the sight to be different too. I swallowed to ensure that I was still alive. I slowly opened my eyes. I did not see the same green, the only thing I remember. It seemed to be someone’s bedroom. I looked around to spot a clock or calendar. A digital clock made me worry less about it being day or night; it read 11:55 pm. ‘Am I stuck with 11:55 of some year? Year? What year am I in?’ I looked around.

Be the first to review “Just you, me and a secret by Ganga Bharani Vasudevan” Cancel reply