You are here: Products Just the Trouble I Needed by Lauren Faulkenberry 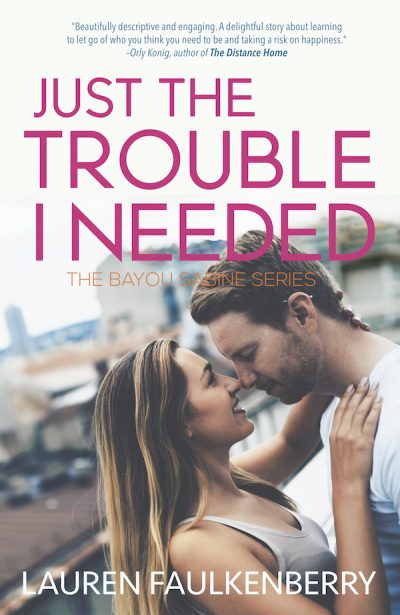 Just the Trouble I Needed by Lauren Faulkenberry

Kate McDonnell wants to escape her hectic city life. A week-long getaway to her friend’s quiet small-town home should be just what she needs to recharge—but when sexy sheriff Andre Dufresne stops by, her vacation takes a turn she didn’t expect.

Kate’s not looking for love—she just broke her engagement with her scoundrel fiancé, and Bayou Sabine is just a temporary refuge. But when Andre turns on the charm, she wonders: would a light-hearted fling really be so bad?

Andre is smitten, and will do anything to win Kate over. He’s never met a woman quite like her, and he’s not about to let her slip away. But the clock is ticking for Kate, and as she gets closer to Andre, she makes a mistake that could ruin everything. Can she slow down long enough to listen to her heart, or will her fear of being hurt again ruin any chance they have at love?

Fans of Alice Clayton and Jennifer Crusie will delight in this lighthearted romantic romp.

Lauren Faulkenberry is author of TROUBLE IN BAYOU SABINE, BAYOU WHISPERS, BACK TO BAYOU SABINE, JUST THE TROUBLE I NEEDED, BENEATH OUR SKIN (all from Blue Crow Books). Lauren divides her time between writing, teaching, and printmaking. Originally from South Carolina, she has worked as an archaeologist, an English teacher, and a ranger for the National Park Service. She earned her MFA in creative writing from Georgia College & State University, and her MFA in Book Arts from The University of Alabama. She was a finalist for the Novello Festival Press First Novel Award, won the Family Circle short fiction contest for her story Beneath Our Skin, and was nominated for an AWP Intro Award. She's a sucker for a good love story. She lives in North Carolina, where she is at work on her next novel.