You are here: Products Just Friends by Marie Cole 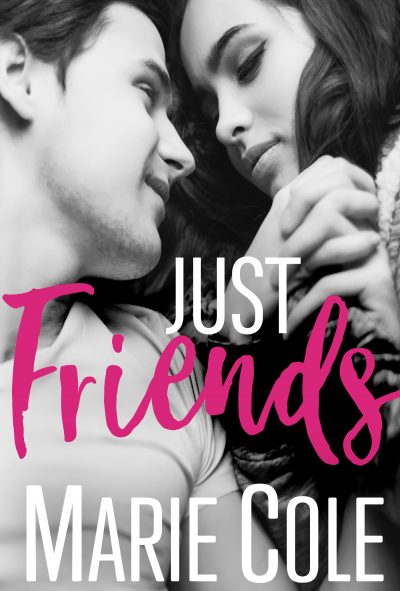 He’s my first crush.
I’m his best friend.
When we are pushed into a room alone together sparks start to fly and there isn’t anything anyone can do to put out the fire that sizzles between us.
Except maybe her
His girlfriend.
With her on his arm there couldn’t be a worse time to explore the depth of my feelings for him.
So for now we’re #JustFriends.
…Or are we?

Marie Cole was born a Navy brat and chose to be an Army wife. To ease the tough lonely nights as an Army spouse she turned to writing. The love of the process, the idea that she can reach others and help them through their tough times is what keeps her writing. She has lived in many states across the US including Florida, Idaho, Michigan, South Carolina, Maryland, North Carolina, Georgia, Missouri and Virginia. She is a self professed cat addict, chocaholic, and social binge drinker. Luckily for her liver she tends to spend most of her time at home with her two growing girls and retired Veteran husband.

When she's not writing she's taking photos of historical buildings, textures and of course, nature, which is incredibly beautiful in itself. She also loves catching up on TV shows (and trying desperately not to eat while doing it). Some of her favorite must-watch shows include: History Channel's Vikings, AMC's The Walking Dead, CW's Jane the Virgin, Taboo, Orange is the New Black, Mozart in the Jungle, The Good Place, This is Us, and many many more. She also recently discovered the sheer joy and elation from attending POUND class.

She is the author of The #JustFriends Series, and the sweet holiday short story that "reads like a Hallmark Christmas Romance movie," Merry Christmas Baby. She is currently working on a new historical suspense romance series.

Some of the praise for Marie from her readers…

"Why must you write so damn good? Now i am buying book 3 to see what happens lol. So in love with this series so far."

"She writes stories that are close to real life! And at times that can be frustrating but the payoff of the ending is SO worth it!"

His jaw flickered. “Dare.”
Stacy flashed a shit-eating grin at me before declaring, “I dare you to spend seven minutes in heaven,” she pointed to a tiny bedroom off in one corner, “alone. With…” She bit her lip and paused for anticipation purposes. I wanted to slap her for it. Who was she going to say? Herself? Jen? Sadie?! “Elly.”
I blinked, stunned for the second time that evening.
His eyes shifted from Stacy, to the offending door and then to me. I felt shivers move through my body. Me?
He looked at Jen. “Alright.”
Jen frowned at him briefly and then pasted on a smile, “You could always just decline, I’m sure the punishment wouldn’t be as bad.” Her hand moved to his wrist, gripping it.
I was still in shock. Me? I felt my cup tipping, and I looked down to see Stacy’s hand pushing it upwards. It had been dangerously close to spilling on the carpet.
My eyes moved back to Kent as he stood and dislodged Jen’s fingers from his wrist. “What are you worried about?” he asked as he moved towards me. I shrank back slightly. He wasn’t really going to do it. Seven minutes alone with me? Before I knew what was happening, he grabbed my cup and finished off the contents.
“But…” I tried to protest as he sat it down on the coffee table behind him and grabbed my hand, pulling me to a standing position. “But…” I glanced at Stacy and then at Kent. “But…”
My feet were moving but my brain wasn’t the one making them do it. He pulled me into the dark room and shut the door behind us. I couldn’t see him in the darkness but I could feel his warm hand around mine. I wondered what he was going to do to me. I wondered who he was going to pretend I was to get through it.
When he didn’t make any moves, I tried to break the tension, “This isn’t exactly my idea of heaven.” I heard his body moving but I couldn’t see him. I tried to loosen our grip on each other but he held my hand tight. My eyes struggled to make anything out in the darkness but they failed.
A knock on the door behind me made me gasp and Stacy’s voice filled the room, “Hey! You only have six more minutes left! We want to hear some noises or see some hickies! It’s Seven Minutes in Heaven, not Seven Minutes of Quiet Time!”
It was as if that was all he needed to get into action. His hands rested on my hips and I could hear the smile in his voice, “Six minutes. Who is getting the hickey?”
Goosebumps rose on my flesh at his words and his closeness. I panicked and pushed him away. “Oh Kent… Oh yes! Oh my God, yes!” Kent didn’t join in so I continued. I could drunkenly pretend to be getting some for six minutes if I needed to. “Yes, Kent! Lick it! Ohhh yes… just like that,” my drunk mind really liked the sounds the pretend Kent was bringing out of me.
Jen’s voice drifted through the door, they must’ve been just on the other side listening, “Pft. She’s totally faking it.”
So maybe I wasn’t as believable as I’d imagined I was. “Push me up against the door,” I whispered to Kent. He did so quickly, his strong hands grabbing my arms. He pulled me against him, our chests melded together. I held my breath, and it left with an “Oh!” as he pressed me against the door again with a thud.
I couldn’t see him but I felt him, his body still pressed against mine. My heart was beating wildly in my chest and I was sure he could feel it too. “Do you like being bossed around in bed?” my voice was still just a whisper. The grunt that came from him spread through me, making me wet. I could feel his breath on my lips and smell the whiskey. “Push me against the wall again. Harder.”
And he did. Either I had drowned out the noises on the other side of the door or there were none. I was lost in the seven minutes I had with Kent. “Oh, Kent… yes…” I’d meant it that time. Him taking control of me was blazing hot.
Jen’s voice briefly cut through my thoughts, “Is she—“ but it was cut off by the blasting of The Rolling Stone’s “Beast of Burden.” My adrenaline was pumping, and I felt the need to do something crazy. I leaned forward and pressed my lips to his. Yes, he was with Jen. Yes, he’d been a dick and ruined my Christmas Eve earlier. But there was still some time to make this Christmas Eve not suck quite as bad. I wanted to kiss him to spite Jen. I wanted to kiss him for me. The spark ignited me and I felt his lips start to come to life as I slipped my fingers into Kent’s hair.
That kiss was between us but I wanted to leave my mark on him, to make Stacy proud. I kissed my way to his neck and then latched on. I felt him pulling away, so I tightened my grip in his hair to keep him still. His neck tasted of salt and he smelled faintly of something spicy. I focused on keeping the seal of my lips on his skin. He groaned, and I eased up just a little. When I felt my lips give out under the pressure, I pulled away. I wasn’t sure what it was going to look like because I’d never done that before but I was hopeful that it would be huge and dark.
“Are you drunk?” I asked him softly. I wanted to know if he was conscious and in his right mind.
“Bad… bad…” he replied.