You are here: Products Juliet’s Journey by Kathy Gates 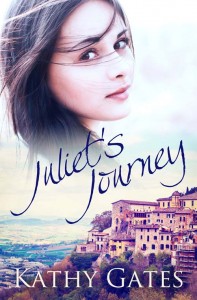 Juliet is out of her comfort zone. She’s fetched up in the tiny northern Italian of Baiardo to do a volunteer stint in an art school. What was she thinking when she signed up? What if she’s too old? What if she doesn’t fit in? Truth is she is trying to get over the death of her mother and find some perspective to get her life back on track. The warm welcome and beautiful surroundings put her at ease. Friendship beckons and there’s a chance of love. That is until someone from her past arrives with plans for her and Baiardo. She finds herself in the centre of a conflict that threatens to tear the place apart.

Whether travelling or staying at home, Kathy like to read about travel, fiction and non-fiction, and that’s what’ll you find on her blog.

The art school that I took as my inspiration is actually in Tuscany, in a pretty walled town called Casole d’Elsa. And yes, I did a volunteer stint there as well. The school is called Centro D’Arte Verrocchio and holds classes throughout summer each year.

Juliet wore a bandanna to cover her mouth and nose. She tucked her hair into her peaked cap and definitely needed sunglasses. Will’s checked shirt had seen better days but it covered her arms. Thick gardening gloves completed the ensemble; her accessories were a rake, secateurs and garbage bags.
The lower terrace ran below the school. Thick overgrowth covered not only the stone
walls but debris that had been chucked over it for many years. Juliet uncovered old boots, a saucepan, bits of crockery and what might have been part of an ancient refrigerator. In some sections small rocks tumbled down, spewing dust.
She was so lost in admiration for both her efforts and the craftsmanship of the ancient wall that she didn’t hear the footsteps behind her. She jumped when a voice bellowed in her ear, ‘Che fai?’
She turned to see a tall, athletic man with steel grey hair and tanned skin. Despite the colour of his hair he had a youngish, handsome face, fierce demeanour notwithstanding. Startled, she stared back at him.
‘Belin, ma questa terra appartiene a me! Vattene!’ he growled.
From above them Will called out, ‘Luca, quit bellowing! We’re only cleaning up the mess on the boundary. Don’t be such an arsehole!’
‘Mi stai prendendo per i fondelli?’ Now he, Luca, was yelling at Will. In lightly accented English, he added, ‘I know what you and your friend are planning. You won’t get away with it.’ He turned on his heel, strode off down the track and disappeared.
Juliet removed her gloves and pulled the bandanna away from her mouth. She called to Will, ‘What the – what was that all about?’
‘You’ve done a great job. Come up; it’s nearly time for lunch.’
He waited till she was standing beside him to explain. ‘That was one of our neighbours. Don’t worry, he lives in Remo, is hardly ever here, which is why we have to clean up the mess.’
So, trouble in paradise? Juliet wanted to know more, but Will wasn’t forthcoming as he led the way up the path.