You are here: Products Juliet Chronicles Book One by Cristin Cooper 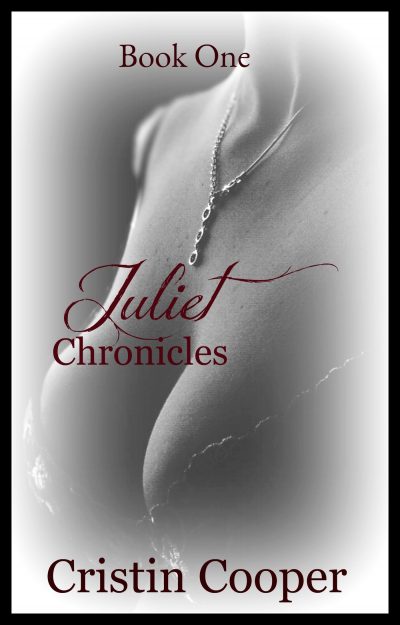 My life was just fine.
My days were spent working, hanging with my best friend and trying not to eat too many carbs.
Then I began getting flowers with unsigned notes and when I sensed someone watching me, my life no longer felt…fine.

You might know me as the girl next door but that isn’t really who I am.
They call me
Prostitute
Call-girl
Hooker
Working Girl
But my clients call me
Juliet

Cristin Cooper has been writing since she was a teenager, but it wasn’t until the age of thirty-eight that she finished writing her first novel. In February 2015 at the age of forty, she braved the world of self-publishing and released her first book Until Now.
Cristin lives in a small town in Oregon with her husband and four kids. She loves her family, reading, writing, riding on the back of her husband's motorcycle and sunshine. Not always in that order.

I kept thinking about this character for months and though I didn't have the whole story, I got glimpses of her. It wasn't until I heard the name Juliet multiple times in a short span of time, that her story came together.

Shivers ran down my spine as we stepped into the ballroom of Fox Mansion. I was still unsure if the feeling came from the thrill or dread of being there. Money and influence dominated the room with its power. Sexual energy vibrated through the space. The sight and sounds of writhing bodies overwhelmed even me––a professional.
Smith’s firm but warm hand guided me through the room. His familiar scent easing the anxiety that gripped my chest every time we came here. I focused my attention on the twin- kling lights dangling from the ceiling, the sound of tinkling glasses and laughter.
My life revolved around sex but there was something about Fox Mansion that never felt right. It wasn’t the exclu- sive sex club hidden behind a well-known name that caused tension. But something else . . . something I couldn’t put my finger on.
I glanced at Smith whose sharp blue eyes scanned the room as if he were looking for someone in particular. The fit of his tux emphasized his tall, lean form. His blond hair slicked back added to his sexiness. Standing with his body tense and a neutral expression on his face, he radiated control and I liked that about him.
The first Saturday of each month Smith brought me here. We spent the first hour mingling with the many high-profile people with enough money to afford this place and the next few hours alone in one of the sex rooms.
This evening felt different. Maybe it was because it was New Year’s Eve and not our usual night but Smith seemed more tense than usual, which said something. Though Smith had been my client for a few years, he didn’t relax or let loose. Everything he did was calculated. I suspected it was why he hired me. A call girl, prostitute, paid escort or what- ever you want to call me. I didn’t ask questions or make demands. I did what he hired me to do.
Smith guided us to a corner of the room where we had a better view of our surroundings. My face heated at all the erotic scenes playing out in front of me. Stages were set up around the room with either couples or groups having sex.
A lump formed in my stomach as I found myself getting wet. I hated it here but I hated my response more. People did things here that reminded me of my past and I tried to keep those memories where they belonged.
That feeling in my gut was the very reason I usually met my clients in the privacy of my condo. I didn’t want the influ- ence of others or enjoy putting on a show for anyone but who I was with.
“Let me take that,” Smith offered as he helped me out of my coat.
When I slipped out of it, Smith sucked in a breath. I didn’t dare look at him to see his reaction. Though I wore more than some in the room, it was less than I cared to wear in public. My lacy pink bra emphasized my 34 D’s and my thong left very little to the imagination. I smiled when I noticed how my matching four-inch heels sparkled under the twinkling lights.
“I’ll be right back.” Smith’s gravelly voice only made me wetter.