You are here: Products Journey of hope and tears by Dieter Ryckewaert 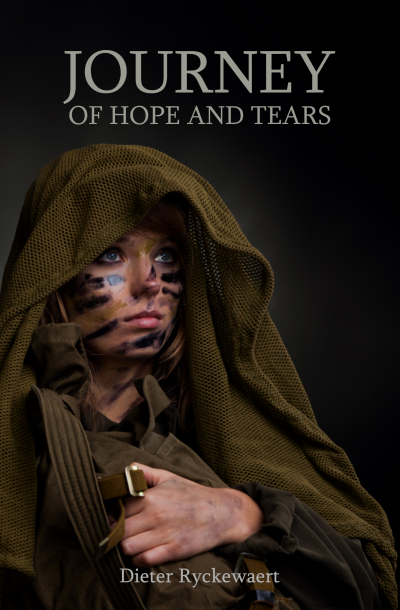 Journey of hope and tears by Dieter Ryckewaert

If you were a refugee, would you be able to move on when your loved ones have all perished?

Jill lives with her parents and brother in Greenwood. She longs for freedom, far away from the Seers Dynasty and their tyrannical regime. She works in her father’s practice as a nurse, and this brings her some joy in her life – a simple but meaningful life.

When Jill’s homeland is attacked by Cerynean soldiers, her dream of finding happiness shatters into a thousand pieces. Jill and her brother are summoned to defend their homeland, but the war is short-lived. Latania falls, and all hell breaks loose.

As soon as the Cerynean soldiers march into the streets of Greenwood, Jill’s father brings her to safety. Aboard an old boat, the Sabrielle, she can flee, but her parents and brother are left behind. Tormented by pain and agony, Jill sees no way out…

Sam, a foreign soldier of the Freedom Pact, lost and miles away from his unit, becomes her salvation. Onboard the Sabrielle, they both realise that they can only survive if they work together. Hunted by the Cerynean army, they begin their journey with only one goal: to escape Latania.

JOURNEY OF HOPE AND TEARS: an unusual story about the true meaning of love, set in a dystopian world, reflecting our own challenges as humankind.

I am Dieter Ryckewaert from Belgium.
I was born on march 2 of 1984.
In my daily life I work in weekends, so I'm free during the week to support my girlfriend that has Lyme disease.
I love books, music and movies.

Journey of hope and tears is the English version of 'Jills Talisman', which was published in Dutch.
Jills Talisman was published through a regular publisher, while Journey of hope and tears is published on Amazon (Indie). It's part of a project, together with my girlfriend to raise money for charity (SameYou). All our profits will be used for people who are recovering from a braininjury.
Why did I write the original: The conflicts in today's world and how they always affect ordinary people. I wanted to write a story seen through the eyes of a refugee and make the reader feel what it is like to leave everything behind in the hope for a better future.
But that's the hard side of the story. I am an eternal romantic and that is reflected strongly in Jill and Sam's journey together.

Century-old trees cast their shadows over the deck of Jill’s
paddlewheel and shielded it from the scorching midday sun.
She had already turned the engine off. She was fed up with
the paddlewheel’s clattering and yearned for peace as she
steered into the forest. She leaned her back against the
wooden helm and wiped the tears from her face with her
sleeve. In her right hand she held a razor-sharp knife.
Today stood in stark contrast to a few days ago, and the grief
tormented her body. How on earth had it come to this?
A gun lay in front of her booted feet; loaded and ready to
fire. She hesitated. Just one shot and everything would fade
into eternal silence. Gather courage, pull the trigger, and all troubles
disappear. What’s so difficult about that? Icy chills ran down
her back when she thought of the agonising pain she would
suffer if she missed. She looked at the knife again. Only one
slice across her wrists was enough. Painful? Certainly. But
that wouldn’t outweigh the peace she would find afterwards,
would it?
At that precise moment, the wind caressed her shoulder
and played with her blond locks, as if it knew what was at
stake. She sobbed and then held the knife to her wrist. The
wind blew stronger, increasing the soothing rustling of
leaves. Jill closed her eyes.
‘On three,’ she whispered, pressing the knife down
harder. ‘One.’ Adrenaline tore through her frail body.
‘Two.’ Her heartbeat pounded into her skull.
It felt as if she were standing next to a gigantic clock with its
clapper bashing the bronze gong.
‘Three!’ Her father’s face flashed in front of her. It was
the last image of him she remembered. Salty tears flowed
down his cheeks, like a river of sorrow. But it was his hopeful
16
smile she remembered above all; the fearless gaze of a man
who wanted to save his daughter. Jill dropped the knife.
‘Help me!’ she shouted distraughtly. ‘Please, help me!’
She couldn’t do it. People she loved had sacrificed
themselves for her. But what was the point? It was hopeless.
Latania had been destroyed, and Greenwood erased from
the face of the earth; her familiar surroundings no longer
existed. Even though she had been able to flee thanks to her
father, there was no guarantee that she would be safe in
Bridgeville. For all she knew, the Latanian capital was also
occupied. Would it be so bad then if she ended her life
instead of waiting around to die a horrible death? She had
seen enough horror and suffering in the last few days. If the
soldiers had moved south, she would be done for anyway.
No, choosing a quick death can’t be that bad. Nobody could blame
her for it.
Jill picked up the knife, and held it in her hands, while
trembling violently. No tears this time… She felt the
pressure of the cold blade on her wrist.
She closed her eyes again and took a deep breath. Soon
everything would be over; all the sadness, all the suffering
and all the pain. She slowly exhaled all the air from her lungs.
Jill immediately felt part of her inner self protesting. A part
of her that wanted to move on and struggled to let go. It was
something unnatural, something she had never experienced
before. Her body fought a hard battle against the dark
thoughts.
Jill tightened her grip on the knife. ‘One.’
She had flashbacks of her past; memories from a carefree
life: the mischievousness she and her brother got up to as
children, the period in which she developed into a young
woman and then the conversations with her mother about
the more “spicy” things in life.
But above all, she remembered when she received her
17
medical degree a few weeks earlier. It was a symbol of the
childhood years she left behind, and the first step into the
world as an adult. Never before had she seen her parents so
proud; their daughter following in their footsteps.
Jill discarded the memories. ‘Two.’ She clenched her
teeth, gripped the knife firmly and…