You are here: Products Jewel-less Crown: Saga of Life by BS Murthy 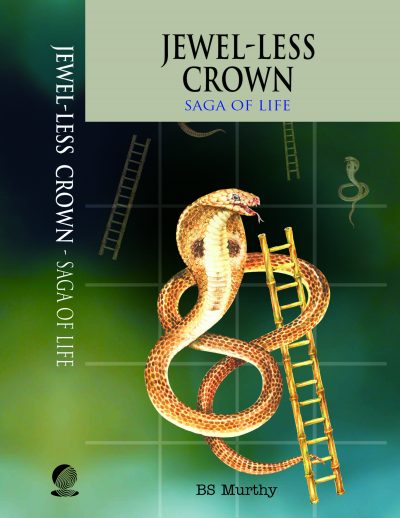 This novel exemplifies the material raise and moral fall of Gautam and Sneha and also the poignant end of the latter and the spiritual rise of the former that is after the fall. Besides, this piquant story depicts the tragic life of their son Suresh Prabhu and his eventual redemption through love for and of Vidya.
Book One, Artha and Kama, is about conflict and resolution arising out of ambition and achievement, intrigue and betrayal, compulsion and compromise, sleaze and scandal, trial and sentence and regret and remorse spread over eighteen chapters.
Book Two, Dharma and Moksha, portrays the possibilities of life through repentance and recompense, hope and love, and compassion and contribution leading to the spirituality of materialism in twelve chapters.
The story of a life time, truly.

Born 27 Aug 1948 and schooled in letter writing, I’m the author of Benign Flame: Saga of Love, Jewel-less Crown:: Saga of Life, Crossing the Mirage: Passing through youth (plot and character driven novels all), Glaring Shadow: A stream of consciousness novel, Prey on the Prowl: A Crime Novel and Onto the Stage: 'Slighted Souls' and other stage and radio plays besides Stories Varied – A Book of short Stories. All these were borne out of my conviction that for fiction to impact readers, it should be the soulful rendering of characters rooted in their native soil but not the hotchpotch of local and foreign caricatures sketched on a hybrid canvas. : http://www.gutenberg.us/authors/bsmurthy

My non-fiction works are Puppets of Faith: Theory of communal strife, Bhagvad-Gita: Treatise of Self-help (sans 110 interpolations in verses with contemporary idiom) and Sundara Kãnda: Hanuman’s Odyssey, also in verse. My audio rendition of my Bhagvad–Gita can be heard on YouTube – https://www.youtube.com/watch?v=6vFU3-LD4iM

Besides articles on general management (The Hindu), materials management (Purchase) general insurance (The Insurance Times) and literary/social subjects (Triveni,) I had contributed ‘Addendum to Evolution: Origins of the World by Eastern Speculative Philosophy’ to The Examined Life On-Line Philosophy Journal, Vol. 05 Issue 18, Summer 2004.

Having taken to reading classics, on my uncle’s advice, in my adolescent years, I continued savoring the works of Tolstoy, Dostoevsky, Gogol, Turgenev, Zola, Flaubert etc. (Proust and Musil came much later), without being polluted by accompanying daydreams of emulating those great masters, whom I came to deify in thrall.
When I was forty-four, I set on my maiden novel, Benign Flame: Saga of Love, so to say, without any apparent provocation or inherent ambition, probably through divine diktat for by then life had prepared me to venture into the fictional arena to enrich the same. It's as if I was led there by my 'writing hand’ through the letters it penned for me in my youth and the articles it let me shape as an observant adult.
It's the creative energy, which ‘Benign Flame’ unleashed that propelled me into 'Crossing the Mirage' besides sustaining to enable me to offer ‘Jewel-less Crown’ the tragic story of the Gautams and seven more works to the literary deity.

Book One – Artha and Kama

Be the first to review “Jewel-less Crown: Saga of Life by BS Murthy” Cancel reply