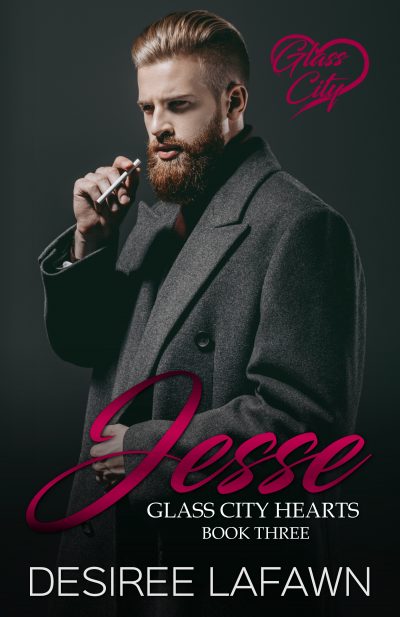 Blood is thicker than water. Blood is family, and nothing comes before family, that was the lesson that had been pounded into Jesse since birth. At least according to his alcoholic father, who had barely managed to stay just this side of being an absentee parent all of Jesse’s life. Now Jesse’s a grown man, and even though he has his own plans and dreams for the future, he’s given it all up—for family.

Harlow Jones was so bad at being a girl it wasn’t even funny. The most feminine thing she had ever done in her life was give birth to her son five years ago. She can’t put on makeup or do anything with her hair besides a ponytail, but she can fix just about anything mechanical that’s broken and knows her way around computer code like a wizard. She just needs a chance. A chance at a better life for herself and her little boy. If she could just get that open position at Glass City Guard it would mean a more stable income and a better school district for him. She certainly wasn’t looking for anything complicated like a relationship, not even with a sexy bearded bartender who smelled like cigarettes and powdered sugar. Harlow doesn’t go to bars. Harlow doesn’t even drink.

But after a chance encounter in a back alley, a bathroom incident, and one of the most terrifying nights of their entire lives, both Jesse and Harlow are going to find that while it may be the most important thing, family doesn’t always mean blood. And the closeness of a stranger might be the missing piece to finding the happiness they thought they would never have.

My son had put his face to the crack in the door, but by the time I noticed and made a move to grab him from his little peeping spot he opened his mouth. “Hey—Mister Jesse, why you got all that hair on your front up top? Is that a grown-up thing? Am I gonna get hair on my front too? My mom doesn’t have any hair on her front part, but maybe that’s cuz she’s got those things there instead.” He pushed the door wide open to show Mister Jesse what he was talking about as he pantomimed boobs with his hands. The man in question was just pulling on a new white t-shirt and looking at the door with his mouth wide open. My cheeks flushed scarlet with embarrassment, but I should have been better prepared. My boy was four. I should be used to the things that came out of his mouth on a regular basis. To be honest, I’d heard worse. For some reason though, in front of this handsome stranger who was helping us out, the mortification was magnified, and I put my hands under my cherubic little boy’s armpits so I could haul him away from the door.

But the damage was already done. I looked up, expecting to see anger on the face of the man who had just been interrupted while he was dressing by a strange little boy who commented on his body hair. I didn’t see it, maybe it was excessive. Maybe he was sensitive about his body hair and my Jesse had just called attention to it and embarrassed him? There could have been any number of reasons why the breach of privacy would upset him, and I raised my eyes hesitantly, almost afraid to see the look on his face.

He had his hands clutching his stomach and stood slightly hunched over. His face was red but not with anger. He was laughing. Oh, thank God he was laughing. Although probably at my expense—thank God for small favors.

“Jesse Jones, you tell that man you are sorry right now,” I admonished, albeit gently. He was four after all.

“But Moooom, he’s even got hair in his armpits.” The last part of his sentence ended in a stage whisper. Like, he thought he was being quiet, but I was pretty sure if there were people standing outside the bar they probably would have heard him. “Mr. Creaton that lives next door doesn’t have hair in his armpits.” That was because Justice Creaton was a drag queen, and likely waxed his pits for ease in performance but I had never asked him. And I certainly wasn’t going to try to explain the complexities of cross-dressing to a four-year-old. Maybe when he was older. Poor Justice, I wonder what odd questions Jesse was going to ask him the next time he ran into him. I would have to remember to give him a heads up. Jesse’s questions could be daunting if you weren’t prepared. I know he took me for a loop more often than not. And even if you answered his question in a satisfactory manner—they just kept coming. He was a never-ending source of inquisitiveness, my boy. Normally I encouraged it. In situations like this, I wish he had zipper lips.