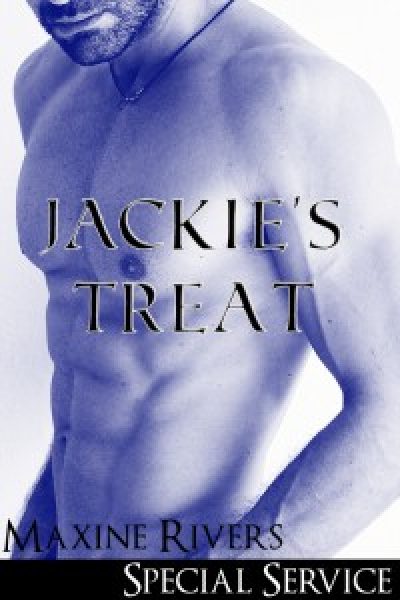 Cajoled by her best friend Heli into spicing up her sex-life curvy and shy Jackie agrees to give the new sex shop in town a try. Even before she dumped her boyfriend, Jackie’s sex-life wasn’t the most exciting and she never expected it to be anything else.

Sexy shop manager Derek takes her by surprise in his eagerness to see to all her needs. He offers her a very special treat.

She’s a night-owl who can spend the whole night in front of the computer writing, although sometimes she goes the old-fashioned route by writing long-hand in a paper-notebook. When she’s not busy writing she can be found reading or watching documentaries and crime-shows.

The idea of using a sex store as setting just popped into my mind. It is a location with some potential.

There was a man behind the cash register and Jackie noticed another one in a section with magazines and books busily shelving new merchandise. Two more men were in a section with DVDs and Blu-rays, but from the way they were studying the DVDs, they looked more like customers. Unsurprisingly she was the only woman.
They all looked up or turned and stared at her, probably surprised by a woman entering the store. Jackie realized that wearing a skirt and a simple top with a low neckline hadn’t been the best idea for a trip to a sex store, despite the warm weather. For a moment she was tempted to turn around and flee, but it was too late now, so she kept her head high and walked inside.
The man behind the cash register smiled at her. “Hello.”
Jackie smiled back and reminded herself to breathe and not stare and blush. His smile was gorgeous. Correction, the whole man was gorgeous, with short, dark hair—Jackie noticed a hint of curl—bright blue eyes, a strong, square jaw covered in dark stubble, and the cutest dimples she’d seen in a long time. From what else she could see of him he was tall and looked fit, liked he worked out regularly. His black t-shirt stretched over broad shoulders and strong arms, though his arms weren’t bulging with muscles. There was some faded grayish lettering on his shirt that read ‘Derek–Your Special Service’.
So, not Heli’s mysterious Tray, then. It would have surprised her if he’d been Tray, as he really didn’t look much like Heli’s type. Heli tended to prefer slender, almost boyish men with light hair, more cute and sweet than masculine and sexy. Jackie was the one who liked them tall, dark, and sexy, and with a certain air of masculinity.
Her cheeks heated when his smile deepened. He’s just being friendly to a customer, she chided herself, but it still felt nice to have his attention.
“Can I help you?” he asked. Even his voice was sexy; deep and low, kind of rumbly. The kind of voice that just sounded like sex, even when it did something as boring as asking a standard sales phrase. It sent a shiver down Jackie’s back and made her nipples perk up in interest.
She shook her head, tried to speak, swallowed hard, and tried again. “No thanks. I just want to look around first.”
Jackie had the feeling that she sounded breathless and nervous and cursed silently for allowing herself to be so overwhelmed by him. She’d always prided herself on her self-control, especially where attractive men were concerned. She didn’t fall for their smooth lines and wasn’t frazzled by their good looks, except here she was and one look had her all hesitant and shivery.
“Sure, go ahead. I’m Derek, by the way. If you have any questions, or need anything, just let me know.” His smile grew deeper still while his eyes swept over her, lingering on her full lips, her heavy breasts and wide hips. She was a bit surprised by his open appraisal and approval of her looks, and that he wasn’t trying to hide the fact that he liked what he saw.