You are here: Products I’ve Loved You for So Long by Christy Rivers 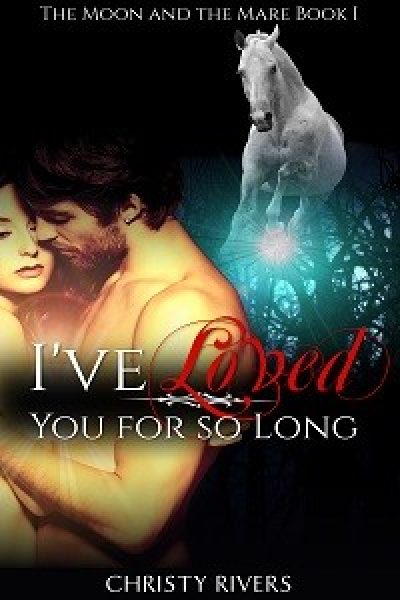 I’ve Loved You for So Long by Christy Rivers

Kelsey: I only came back to Stonefall to uncover my past, but what I got instead was the strange ability to turn into a horse at night. My transformations are accompanied by visions of a woman and a shifter prince, their bond so strong I can feel it from lifetimes away. I can’t control any of it, and that’s what scares me the most…

Gunnar: I thought we were destined to be together. Then, I saw her transform. My pack tells stories of the cursed white mare, whose appearance brings immediate disaster. I still want her, but I will never have her…

Sparks fly when Kelsey Henry and Gunnar Dempsay meet for the first time, but the forces are stacked against them. Kelsey is the white mare of shifter legend, and Gunnar has a duty to protect his people.

Still, their attraction is undeniable. Their love is so forbidden, it could kill. Gunnar knows this for a fact, because it’s already happened before.

Hi, I’m Christy. I love it when a strong man can be sweet, when young women are empowered, and I really love a romance with some magical elements! With me, you get what you see: paranormal romance, shifters, and werebears. Mostly werebears. I like to write the kind of stories that are best read by a cozy fire with a glass of wine in hand, and I hope you like them, too.

I had an image in my mind of a pack of wolf shifters living on a trailer park. I created the character of Kelsey Henry and gave her an adventurous spirit so she could go and discover that pack of wolves.

The sunlight dappled the black earth. I walked through the forest, my ear tipped to the wind. The instinct rippled inside of me. I ran. My two bare feet crunched through twigs and loamy, soft leaves. Then, the two feet became four as I phased in a burst of energy.
My keen wolf’s nose picked up the scent of my brothers and sisters hiding in the forest. I could hear them shuddering, breathing, waiting.
I slowed down. I stopped. I could see pieces of the road through the trees. There was a car making its slow way toward Stonefall. I could already tell that the driver was distracted.
Ha! I thought to myself. My ears prickled, picking up the rumble of Daisy DuPont’s beater approaching the bend from the other direction. This should be good. The others were already jockeying into position. If I didn’t hurry, I’d be stuck watching the entertainment from behind a rock.
I hurried into a small copse in the trees and hid in the shadows. Perfect.
The crash happened seconds later. It was just a small one. The little one was lucky that she hit only the corner of DuPont’s pickup. I watched the car roll into the roadside and stop.
“Are you crazy?” DuPont screamed.
I glanced at the other car. A brunette head poked tentatively out of the driver’s side, followed by a long neck and strong shoulders. She turned her profile in my direction, and I could see that she was biting her lip.
Leaves rattled all around me as the scene unfolded. To human ears, it would’ve sounded like wind. It was really my shifter brothers and sisters, stifling their laughter as they watched the clumsy newcomer interacting with the infamous Daisy DuPont.
“Nana! I need your help. I got in a car accident!” she said. A few seconds later, “I’m in Oregon. I’m just outside of town.”
My ears twitched up with curiosity. So this woman had a relative in town. I wondered who it was.
“Nana, this woman is crazy—oh, thank you! See you soon!”
The young woman hung up and marched past DuPont without speaking another word to her. I heard one of the nearby wolves give an indignant snort.
Show’s over. Let’s go, he was saying.
More rattling leaves, more wolves sliding silky-silent along the forest floor, invisible to the human eye. Everybody else was going back home, but my paws were still rooted in the earth. My eyes were still trained on that young woman.
Something about her…
I raised my snout into the air and sniffed. There was the cold smell of forest and mountain, rocks and tree bark, the bitter, gamey scent of the others, and just…something else. Something that was obviously foreign, but somehow familiar to me.
Could it be? I thought to myself.
I raised myself on my haunches. The others were waiting for me, but I just had to know. I watched as the woman stopped beside her car, resting her hand on the roof as she prepared to get in.
Look at me, I thought at her.
And she did. She raised her face to the forest for only a second before diving for cover within her vehicle, but one second was just enough.
It was her.