You are here: Products It Doesn’t Always Rain: A Collection of Literary Erotica by Tess Mackenzie 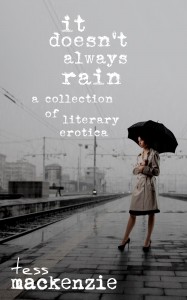 It Doesn’t Always Rain: A Collection of Literary Erotica by Tess Mackenzie

How to Hit on a Bartender

Hey, this is Tess. Sorry, this is a bit of a weird change in tone. So before you buy this, I just wanted to say that everything I write is available free too. Yes, the stories that make up this collection, along with everything else. Just to be really clear, so no-one is upset when they realize later on. This book collects these stories into an actual book, and an ebook is probably easier to read, and if you would like to buy it, I would really appreciate it, and that would be fantastic. But on the other hand, if you’d rather try reading a little first, or would rather not pay at all for whatever reason, then please come to my website or Wattpad and read there!

And thank you for being interested and reading this!

Be the first to review “It Doesn’t Always Rain: A Collection of Literary Erotica by Tess Mackenzie” Cancel reply