You are here: Products Irresistible Prejudice by Lily Holland 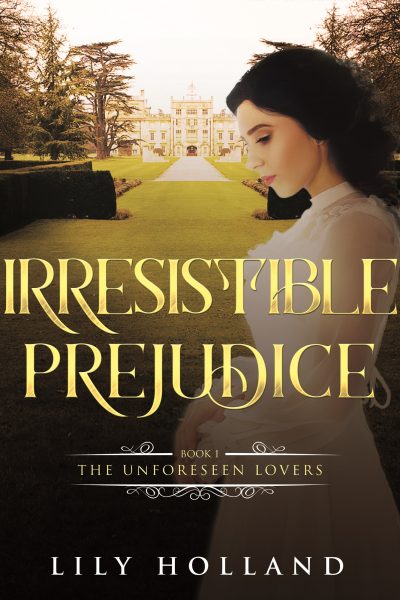 Can you fall in love with your childhood nemesis?

Charles Knightley has never wondered. Ever since he was a child, he hated Miss Selina Heathfield with a dedicated heart. Earl of a wide estate, his peaceful life is soon troubled by his uncle’s letter: the old man wants him to marry Miss Heathfield.

Will the woman redeem the memory of the nasty little girl imprinted on his mind or will she prove to be even more of a nightmare than anticipated?

Are love and hate really two sides of the same coin? Find out in this sweet and short regency romance!

If you like Regency Romance and Arranged Marriages Stories with stubborn Lords and beautiful Ladies discovering passion and romance in the British countryside, then “Irresistible Prejudice” was made for you!

“Irresistible Prejudice” is a Historical Regency Arrange Marriage Romance novel where you will NOT find cheating or cliffhangers but a rejoicing happily ever after.

First book in the series of standalone novels The Unforeseen Lovers, “Irresistible Prejudice” offers the perfect first taste of Regency Arranged Marriage Romance to get you hooked!

Get This Book FREE With Kindle Unlimited!

Lily Holland writes passionate, romantic romances. She enjoys reading many genres such as historical and regency romance, contemporary romance, fantasy and sci-fi romances as well. Love is all around, so why stop to one genre?

Her books are sweet and filled with sexy men and witty women. In each of them, you'll find the necessary sexy scenes to keep yourself warm and a lovely happy ending to finish on a happy note.

I love Historical romance and especially Regency romance. This book is the first book in a series entitled The Unforeseen Lovers. I wanted to write a regency series of companion novels so that the readers could read each book independently.
I have always loved writing but this book is my first try at Regency romance so it makes it very special to my heart in a way.

I sigh as I let the letter between my hands fall to the desk. How dare he? I turn away grumpily and head to the window. My estate is large, my mansion luxurious and my annual income of ten thousand pounds. I’m rich, I’m young and yet, my old uncle thinks he can do with my life as he pleases.
I frown as I see a stable boy run down the alley to the stables. Life here at Clarencroft is sweet, it’s not as grand as it can be in London, the company isn’t as refined and the society not as well-bred, but it’s quiet, safe, peaceful. It’s home.
I head back to my desk and read the letter for what must be the fifth time. If he were standing right in front of me, I would hit my uncle. I inherited my father’s fortune, his estate and his name, but somehow my uncle kept enough power over the family’s mining business to use me as a puppet in his schemes of grandeur. I can live without his approbation, but I am his only heir and he makes it clear every single time we meet that if I want for the family business to remain in a Knightley’s possession, I have to obey him. Until today he has never been too hard to please, go to Oxford instead of Cambridge, don’t get engaged in the navy, don’t marry any kitchen maid…
Until today… In this despicable letter, his words are clear, inflexible, he wants me to marry a young Lady he “considers wise enough to be a respectable mistress of Clarencroft and wealthy enough to be an agreeable addition to the family”. Of course my uncle would think it his role to pick out a wife for me, he probably feels concerned about the kind of woman I might marry but to presume I might marry the one he chooses for me? To imagine I could ever marry her? Because I know her, I know the name he has written in his slightly trembling handwriting, that’s a name I would never dream of forgetting.
Miss Selina Heathfield. Miss Heathfield of Heathfield, daughter of a Duke, cousin of a European prince, only heiress to a colossal fortune she will inherit soon according to her father’s health.
Miss Selina Heathfield, the very girl I despise more than any other. I would rather marry a kitchen maid than her. My uncle writes she is “pretty and elegant”, but he forgot to mention there how pompous, rigid and condescending a woman she is.
A knock on the door makes me frown. Mrs. Brock offers me an apologizing look and she tries to smile.
“Sorry to disturb you Sir, but Sebastian just came in saying a Lady Heathfield would soon call on you. Should I prepare rooms for her and her party?”
I glare at the woman as I grit my teeth in annoyance. My uncle considers his order is law. If he wants me to marry this well-bred girl, then I will, that’s what he thinks. Well, I’ve been nice enough never to fight him, but I won’t let this pass. He may invite her to my home, have organized this entire masquerade with her father, I won’t accept this engagement.
This girl is a living nightmare, the single thought of her nasty smile as she ran away accusing me of her mischiefs when we were children isn’t the only thing that doesn’t sit well with me. I remember her vain and mean, there’s no way I’ll ever marry her.