You are here: Products INTO THE STREETS: An Antiwar Love Story by Charles S. Isaacs 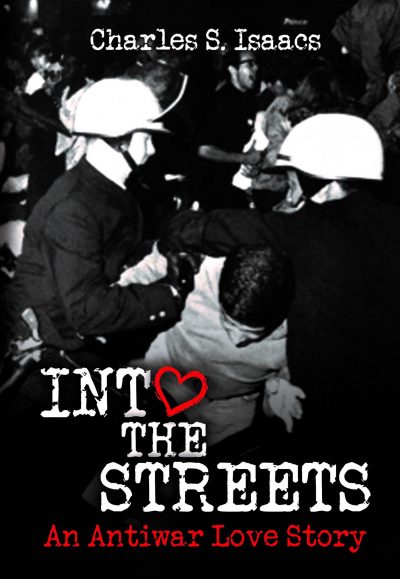 INTO THE STREETS: An Antiwar Love Story by Charles S. Isaacs

It’s the late 1960s. The Vietnam War, the Antiwar Movement and the Black Power Movement are rushing toward their explosive peaks. In the midst of this charged environment, an inter-racial pair of young activists fall madly in love. Awaiting them are excitement, danger, heartache and redemption.
“Into the Streets: An Antiwar Love Story” chronicles these lovers’ challenging journey, their coming of age amidst an unpopular war; a racially polarized Chicago; a hostile mayor and ever-mounting threats, all while working through their own deep psychological issues. 1968 is marked by campus unrest, urban rebellions and assassinations, as well as political violence that thrusts the duo into clashes with the police and the National Guard. The suspense builds breathlessly to a heartrending climax during the street protests surrounding that summer’s Democratic National Convention.

Charles S. Isaacs has been a schoolteacher, college professor, social activist, community organizer, real estate consultant, storyteller and journalist. His undergraduate studies were in Mathematics (LIU-Brooklyn), after which he attended the University of Chicago Law School, living on the city’s South Side during the time period of this story. His later graduate work was in the Social Sciences, earning an M.A. (New School for Social Research) and a Ph.D. (The Union Institute & University). His published work encompasses fiction, poetry and award-winning non-fiction.

My original intent was to introduce readers to life in the 1960s antiwar movement. Once the characters took shape, though, they turned it into a love story.

Be the first to review “INTO THE STREETS: An Antiwar Love Story by Charles S. Isaacs” Cancel reply