You are here: Products Interview With A Seducer by Maggie Tideswell 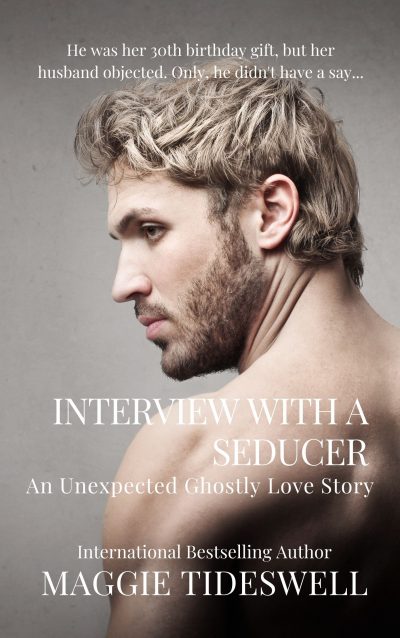 Interview With A Seducer by Maggie Tideswell

He was her 30th birthday gift, but her husband objected. Only, he didn’t have a say…
Her best friend gave her an unusual birthday gift – a night with a professional seducer of women.
What was meant to be a turning point to get her out of her rut, Rachel turned into something more palatable to her that would also keep Jane off her back – an interview.
Faced with the man across a table a perfectly public place, it could only go from bad to worse – for her. The more questions she asked him, the more she liked him. Only, he knew too much about women, and she didn’t want to be part of his harem. And he had no idea how to be faithful to only one woman.
Then he realized the danger she was in.

Maggie Tideswell is an international bestselling author of spooky paranormal romance. She never planned to write ghost stories, because she actually wanted to write romance, hot, steamy, full of emotion. You know the kind – boy meets girl, they fall in love, then boy loses girl and wants her back…
That was not to be. Before she knew it, there was a persistent ghost on the page who wouldn’t get out of the way of real storytelling. So, the only thing to do, was to give him a job. If he wanted to be part of the story, he had to work for it.
Maggie soon found that the trick was to combine things that couldn’t be rationally explained, with sweaty bodies and rumpled sheets in such a way that toes curl and hair stand on end.
Married to a chef, Maggie is nearly as passionate about creating new dishes as she is about creating alpha heroes every woman could fall in love with, just as she does, every time.
Maggie has several books published, all featuring ghosts, with varying levels of heat.

I have always wanted to be a writer, but never got round to it. Then, one day – it was a Sunday and it was my turn to work that day – I had nothing to fo and started fiddling around on the computer. I just typed up a bunch of ideas, but later, at home, when I read through it, it was rather good. From that day up to now, I have written every day. The trick was just to start – the desire to write took over and became a compulsion.