You are here: Products Interstellar Angel by Laura Navarre 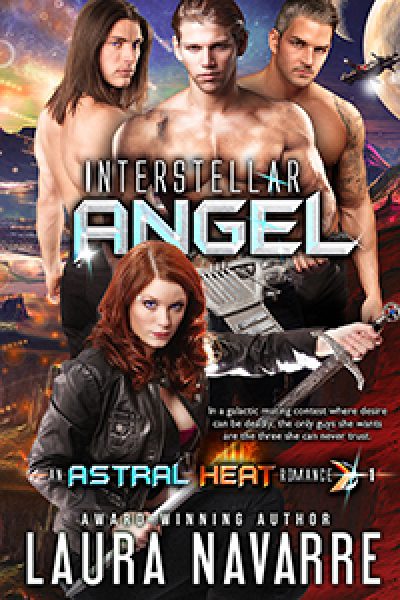 In a galactic mating contest where desire is deadly, the only guys she wants are the three she can never trust.

In a faraway galaxy on the edge of apocalypse, cyber samurai Kaia of Kryll is the daughter of a tyrant who’s worshipped as a god by billions. A prison sentence she’ll kill to escape, since women like Kaia are worshipped in chains. And she’s just become the prize five hundred sexed-up suitors will lie, seduce, and slaughter to possess in a ritual contest for her bed.

In the scramble to slip past her samurai defenses into her cybersuit, the only guys she wants are the three she can never trust. These four have a boatload of shared secrets and a shared passion so combustible it’s practically pyrophoric—breaking every dangerous rule on a world where lovers are crucified for unconventional unions. Their illicit heat will either end the war destroying all their races…

Or get the four of them killed when a god unleashes a death warrant for their heads.

Interstellar Angel is an epic, hyper-sexy, MMMF reverse harem space opera/sci fi romance and your gateway to the Astral Heat universe, where Star Wars meets The Hunger Games. Laura Navarre delivers turbocharged outer space action with a fearless heroine, a cliffhanger series that ends with a guaranteed happily-ever-after, and a whole lot of heat.

A long time ago in a galaxy far away, Laura Navarre was an award-winning dark historical romance author for Harlequin, while her diabolical twin Nikki Navarre wrote sexy spy romance. In a daring bid to escape a global pandemic, armed only with an MFA in Writing Popular Fiction and a professional background in weapons of mass destruction, Laura voyaged through a wormhole to an alternate universe where she crafts turbocharged, epic, hyper-erotic science fiction romance starring three super-sexy heroes, one seriously kickass heroine and plenty of sleek, sizzling outer space action.

I was reading The Hunger Games and started toying with the idea of a galactic mating contest starring a rebel princess and five hundred sexed-up suitors who'll kill to get the girl. Because whoever wins the contest rules the galaxy. Every searing encounter broadcast live on interstellar news. But my heroine wants nothing to do with any of it.

Take the galaxy's most mesmerizing telepath, add a sexy scourge-of-the-galaxy space pirate and the icy imperial enforcer who's both his deadly nemesis AND his mouthwatering obsession, infuse with LOTS of steam and sleek outer space action, and I was definitely inspired!

For some damn reason, he always brought out the devil in her. Kaia hitched her brows and held his stare. “I’m not begging yet, boy toy.”

Amethyst lightning flashed in his eyes. “You will be.”

And just like that, he was on her. Unleashed from all that godlike restraint and savage with need. A predator crouching between her legs, pinning her in place, hands sliding up her thighs to trap her.

“I want you to show me,” Nero breathed. “Show me how you want me to touch you. Show me how you pleasure yourself when you fantasize about riding me in your bed.”

Angels and asteroids, that ego of his.

Catching the thought she lobbed at him, he grinned at her but retracted nothing.

“Wouldn’t you rather have me show you how Dex touches me?” She just couldn’t seem to stop taunting him. “Or maybe Zorin? You haven’t been in his bed yet, have you? Want me to tell you what he’s like?”

“I’ll find out for myself soon enough.” His guttural tone scraped against her senses to make her shiver. Even as he nuzzled her inner thigh with heated lips and looked up at her with those infernal eyes. “Right now, they’re light years away. Show me you.”