You are here: Products Interludes, A Short Lusty Satire by Ida Tornovski 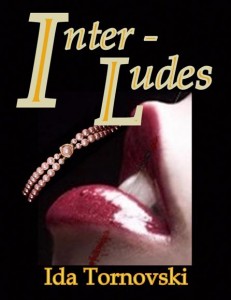 In Interludes, Ida Tornovski shares short satirical stories about one woman’s trysts and tribulations with love. Some of the men are losers, some are boozers. Others are lawyers and cops, with the odd prince thrown in. They all play musical chairs on the stage of Life, Lust and Love.

Ida Tornovski was born into a politically divided Europe. Writing only in English now, she spends her time between the ‘Old Country’ and the United States.

First Ever
I don’t know about you. But for me, at the ripe age of sixteen, the whole thing was an utter let-down. There was a lot of fumbling going on during one late hour on a dark country road.
We were thrashing about in the backseat of an American-made car. One of those humongous boats almost as wide as one of our cobblestone streets. It had fins to match the biggest and baddest shark. I later learned that it was a Lincoln, and highly ostentatious for a Europe still in the throws of decades of post-war depression.
That its owner was a prince (I am talking verifiable aristocracy here) didn’t make it much better for me. He was still a fumbler, with a reputation for my old man to have locked me up just as a precaution. His Highness happened to be one of my father’s much younger drinking buddies. I am just glad my sweet dad never found out about this sorry tryst, for he surely would have borrowed the nearest shotgun.
Cocooned in my nubile dreams, I had imagined myself in the role of la châtelaine riding about our princely estate, its red roofs gleaming through the forested hills high above our quaint village. There was no castle, but the vast property held the requisite manor house with nearby stables and barns. It also had an inn with its courtyard shaded by an ancient chestnut tree. There, patrons could enjoy a foamy beer with their sauerbraten, or wash down a hunk of smoked bacon with the estate’s heady new wine.
In retrospect, it was my misfortune of having set my sights so high right from the start. I never married. The prince chose his bride from among my homeland’s impoverished aristocracy that stubbornly clung to what was left to them after a devastating war: Titles from a bygone era, and their marriageable daughters.
With appropriate pomp and circumstance, my prince got married in his estate’s Baroque chapel sacrosanct for its dedication to several chaste saints.

Be the first to review “Interludes, A Short Lusty Satire by Ida Tornovski” Cancel reply