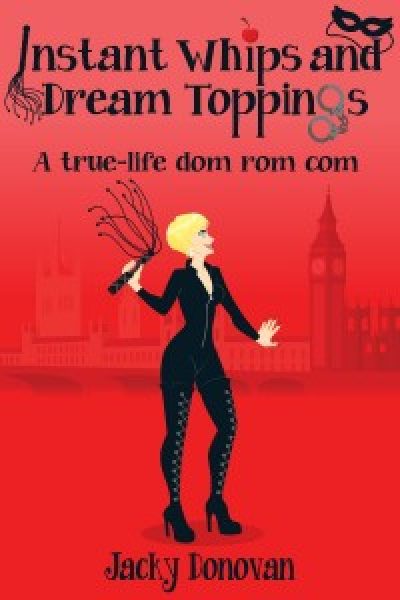 What happens when you swap business suits for kinky boots?

An MP with a choux fetish. A Paddington Bear with a penchant for pinnies. A squirming Batman in baggy blue Batpants.

When Jacky meets Max she discovers desires she didn’t know she had, from luscious lesbians and ménages à trois to the tantalising thrill of control.

With the power of her sexuality unleashed, Jacky transforms into Mistress Kimberley, a high-class, highly in demand temptress in command of her very own dungeon.

Soon she is up to her black-leather basque in a wickedly delicious assortment of men and women and their bizarre and risqué fantasies.

From mouth gags to witty gags, Instant Whips and Dream Toppings is a true-life rollercoaster of love, power and laughter that will leave you begging for more.

In between her writing she has recently trekked to see Mount Everest; tandem jumped from a tiny plane; been on Canarian TV due to her crazy long fingernails; run a lesbian dining club; escaped from a yoga holiday in a dinghy; and regularly does charity work for Breast Cancer and Gay Pride. She currently spends her time between London and Gran Canaria.

“Batman” came to visit me in the form of a client with a bizarre roleplay scenario. After a humorous session my fingers felt compelled to write the story. Many more curious fantasies transpired, not least of which my own, played out with a married man with whom I had a life-changing and lengthy affair. Romance, love, power, control, and humour all combined to result in my erotically explosive book.

Be the first to review “Instant Whips and Dream Toppings: A true-life dom rom com by Jacky Donovan” Cancel reply