You are here: Products Inside Job by Alexis North 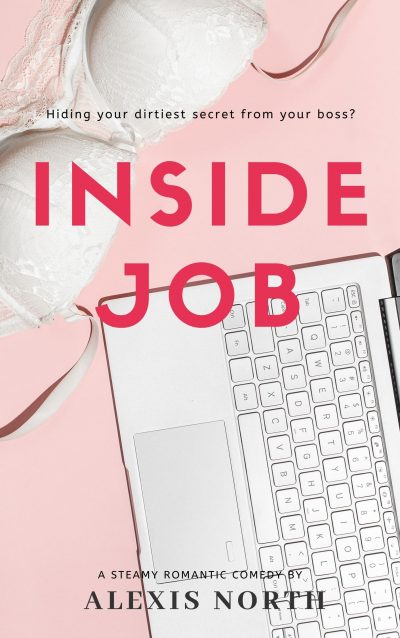 Inside Job by Alexis North

Let’s see, there is…

Sex in the office,
Sex at the coffee shop,
Sex on a pool table….

I mean, who would write such smut?

Welcome to my life. I’m Harper Brimley, human resources manager by day, and housekeeper of dirty corporate messes by night. And what do I do? I fix scandals before they even happen.

And I need to do it before Jack finds out the real truth… that I’m the one who’s been writing this smut all along.

Inside Job is a stand-alone, forty-thousand word novella with an HEA and no cliffhanger.

Alexis North is a thirty-something woman who loves steamy books – both reading them and writing them. Formerly a manager at a large technology corporation, Alexis is now enjoying the suburban life. Outside of writing, she loves baking French desserts, binge-watching an entire season of a television show in a single day, and hiking with her husband and two dogs.

He stops directly in front of me, his expression hard and unreadable. He leans in, looming over me, putting his hands on either side of me so I am trapped against the desk with his face mere inches from mine. His eyes radiate fire, and he looks like an executioner about to ask me for my final words.

But he does not say anything. He is silent, his blue eyes burning into my brown ones. Being so close to him, I can see every possible hue in those eyes, from a deep rich navy to a muted baby blue.

We stare at each other, both a little out of breath and unsure about what to do next. Our eyes dare the other to make the first move. It is a staring contest where the consequences are dire and dangerous. Where any movement can mean utter destruction.

He breaks eye contact first. His eyes move to my mouth, and I unconsciously lick my lips. My throat has suddenly gone dry, and I wonder if I should ask him if I can go get a glass of water. Probably a bad idea. Now that he has caught me, there is no way he is letting me out of his sight.

Realistically, I have two options here.

Option one: Come clean. I should just tell him about my inappropriate thoughts and how it all innocently started as one fantasy and a poor decision to put it in writing. And that yes, I understood that I was a responsible Human Resources Manager whose number one responsibility was discretion. And that I owe him a very profuse apology.

Option one is definitely the sound choice here. It is the smart option. I could probably even keep my job. Maybe we could laugh about this months from now.

Instead, I choose option two. I close the distance between us, stand up on my tiptoes, tug his shirt to pull him close, and press my lips against his.

If this is the end, I may as well go out with a bang.