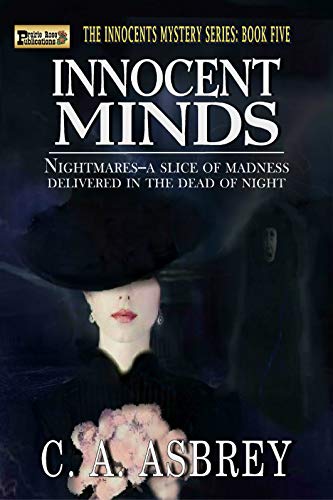 After suffering a horrific loss, Nat and Abi must try to piece their lives together, build a future, and repair the past. But before they can figure out their own complicated relationship, they must unite to help Jake find his children—no easy task, since their mother has disappeared, and they’ve been left with a priest who is bent on giving them away!
In a maelstrom of grief, anger, and legal complications, one of Abi’s friends, Dr. Vida Cadwallader, also a female Pinkerton, steps up to help. As Vida tries to help The Innocents make sense of what’s happening, she soon becomes embroiled in mysterious happenings within the brutal insane asylum where she consults part-time. When one of her colleagues is murdered, Vida quickly becomes a suspect.
With no time to lose, Vida, Abi, Jake, and Nat band together to free one of the asylum’s unwilling patients who may hold the key to all their unanswered questions—if she only lives long enough to survive the escape. Now, with an unknown murderer on the loose as well, time is running short for them to find the children, solve the crime, and spirit the patient away to safety. Can they keep their necks out of the noose and buy enough time to solve the mystery shrouding their lives? Can anyone make sense of this world of shadows, darkness, and madness?

Chris Asbrey has lived and worked all over the world in the Police Service, Civil Service, and private industry, working for the safety, legal rights, and security of the public. A life-changing injury meant a change of course into contract law and consumer protection for a department attached to the Home Office.
In that role she produced magazine and newspaper articles based on consumer law and wrote guides for the Consumer Direct Website. She was Media Trained, by The Rank Organization, and acted as a consultant to the BBC's One Show and Watchdog. She has also been interviewed on BBC radio answering questions on consumer law to the public.
She lives with her husband and two daft cats in Northamptonshire, England—for now. She’s moving to the beautiful medieval city of York.

A wobble on the mattress jolted Sewell out of the arms of his dream-woman. He grunted and shifted under the covers, moving onto his other side. He suddenly felt a dead weight on top of him, an immobilizing, ponderous pressure which left him paralyzed and unable to move. Sewell gasped, sucking in a breath of a sweet, sickly miasma which filled his lungs as he took short pants of fear. His eyelids opened snapped open as the horror of his immobility climbed. He was pinned beneath his bedclothes, unable to move a limb, except for the feet which flailed and floundered beneath the tangling sheets.

He tried to cry out but found his impotent screams lost in the fabric jamming his mouth. He lay, pinned to the bed, rigid and immobilized as his eyes became accustomed to the darkness and a figure loomed into view. Sewell’s heart stilled at the sight of a hideous crone looming over him, her wild white hair standing straight out from her head in a tangled mass in every direction. Her lips curled back in disdain around a mouth which appeared to be laughing, but not a sound was to be heard. The hag’s eyes were in shadow, lending her the appearance of a screaming skull floating above him. She sat on his chest, rendering him unable to scream, or even move as the smell filled his nostrils. It felt like powerful arms and legs kept him pinned down. What kind of nightmare was this?

The gorgon pressed close, so close he could feel the heat of her breath on his face. All he could do was blink and tremble, too stupefied to move. It seemed like the longest time before the blackness crept in, and his eyelids dropped closed once more. The nightmare didn’t leave, it took him; engulfing him entirely until he felt nothing.

Dawn crept in by inches, the dark transitioning from black to gray, until the low morning sunshine added a warming brightness to the scene. The shadows were as long as the sunbeams were cleansing, chasing down the retreating darkness to a mere frown until the morning smiled on another new day. The sun’s confidence grew, climbing higher in the sky, proud of the majestic light which gave life and succor to the whole planet—well, not all of it. Sewell Josephson never saw another day. That day saw him though, swinging gently by the creaking rope fixed to the newel post at the turn of the staircase on the top landing. The ligature bit into the neck below the engorged face from which a purple tongue protruded from his dead gaping mouth.

The only life in the house stared at the figure with unblinking black eyes and a twitching tail. The cat turned her head at the sound of a key in the back door. A human at last. Maybe the cook would know what do to?