You are here: Products Innocence (Tales Of Olympus, Book 1) by Lee Savino 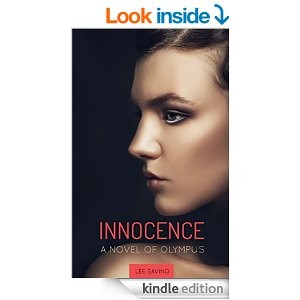 New to the city of Olympus, Cora runs from a stalker straight into the clutches of mob boss Marcus Ubeli. Wealthy and powerful, the handsome business man sweeps her off her feet in a dizzying romance. But as she falls deeper under his spell, she begins to discover the truth of the city’s criminal underworld. Can she truly love a man who will never let her go?

Cora is the maiden Persephone and Hades is Marcus Ubeli in this modern retelling of the Greek myth.

Lee Savino has been telling tales since she was young. While she was studying creative writing at Hollins University, her first manuscript won the Hollins Fiction Prize. She loves writing books about strong women and the sexy men who love them.

Then one rainy night I saw a young, beautiful woman running through the dark streets of the city, and I sat down and wrote the first scene where Cora (Persephone) runs from a stalker straight into Marcus Ubeli’s arms (Hades). The romance continued, with Cora torn between loving the mob boss, and coming to terms with who he really is.

“I should have done this a long time ago,” he murmured.
“What?” she started to say, and leaned forward to hear the answer, but at that moment he looked up, and caught her mouth on his, and then it was all over. Every thought went out of her head, all but Marcus, Marcus, and he was standing now with his arms around her and body pressing hers over the desk.
“Marcus,” she gasped, when he released her lips. He was still standing close, however, and his arms still held her.
“It shouldn’t have taken me so long. With no other girl, would it have taken me so long.”
“So long to do what?” she asked, her thoughts still swirling.
“This,” he said, and kissed her again. Now she came alive, responding, and her hand came up to stop him but, no, it simply took the plane of his cheek as if she would hold him to her, and then her fingers raked through his hair, her breath coming out in a shudder.

Be the first to review “Innocence (Tales Of Olympus, Book 1) by Lee Savino” Cancel reply